The National Transportation Safety Board has concluded that severe icing led to the sinking of the fishing vessel Destination in the Bering Sea last year, killing six fishermen on board.

The Destination disappeared with all hands on the morning of February 11, 2017, while under way from Dutch Harbor to St. Paul. Her EPIRB activated after 0600 hours and alerted the authorities to her sinking, but no mayday call was received. SAR units located her debris field and a sheen, but no sign of her six crewmembers. Her wreckage was later found just off St. George Island, about 200 nm northwest of Dutch Harbor.

On the morning of Feburary 11, 2017, Destination was bound for St. Paul for the opilio crab season. She likely had 200 pots on board, within the allowances of her stability booklet under normal weather conditions. She was under way off St. George, making a steady speed of 9 knots, when her AIS reported a rapid turn to starboard and then ceased transmission. Her EPIRB activated at about the same time, triggering a SAR mission. Nearby fishing vessels joined the search, and two of them recovered life rings bearing Destination's name.

Marine forecasts for the Pribilofs at the time of the accident voyage warned of heavy freezing spray, a common weather condition in the Bering Sea in February. The NTSB estimated that Destination was exposed to icing conditions during the final 23 hours of the voyage, and she would have experienced heavier exposure to icing and higher seas after she transited out of the lee of St. George Island, about half an hour before she went down. Icing raises a vessel's center of gravity, reducing stability and (with sufficient quantity) raising the risk of a capsize.

In testimony from fishing vessel crews that had been operating nearby, the NTSB found that other boats had experienced icing at a rate of 0.25 to one inch per hour, and one reported stopping four times to break off the ice. Several fishing vessels had anchored off St. Paul and St. George to avoid exposure to the forecast weather conditions. 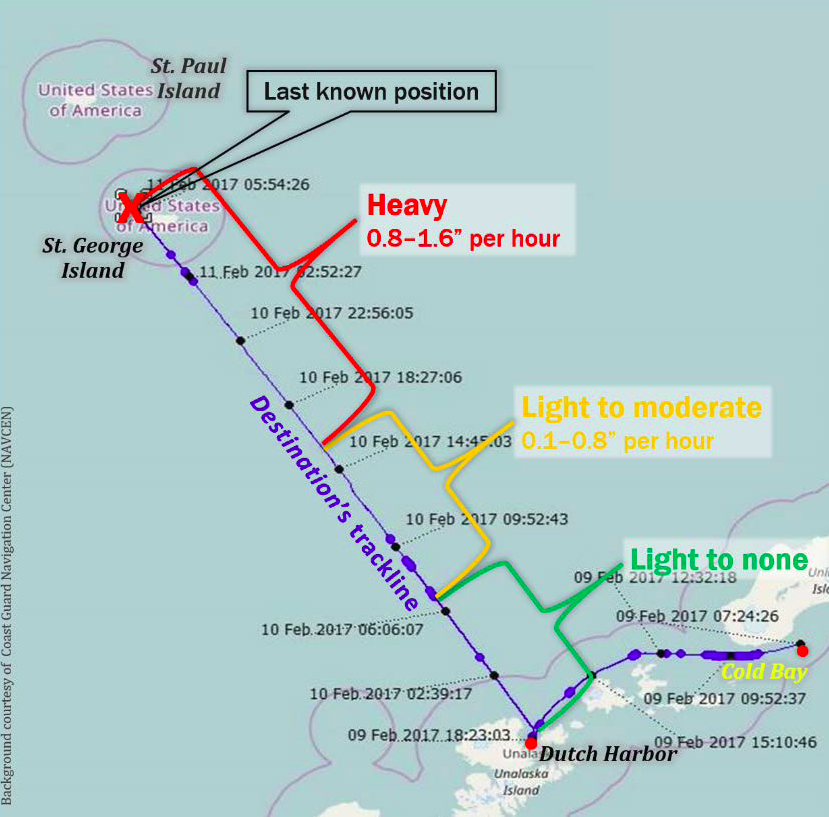 The Coast Guard's Marine Safety Center performed an analysis of the Destination's theoretical stability under several levels of icing, and determined that she would have had a negligible righting arm if she had accumulated eight inches of ice - an indication that she could have been vulnerable to capsize if her crew had not slowed down and used hammers to break off some of the weight. Destination's AIS signal showed no signs of slowing as she passed through the lee of St. George Island.

In an advisory to shipping, the NTSB cautioned crab fishermen to take precautions in icing conditions. Sailing with fewer pots on board during heavy icing forecasts and covering pot stacks with tarps will reduce the amount of surface area exposed to icing, and seeking a lee, reducing speed and changing heading can slow the rate of accumulation. In addition, the NTSB cautioned against the effects of fatigue - a constant battle in the fishing industry - and its impact on the crew's ability to respond to icing conditions.