Nigeria marked the official launch of its highly anticipated Integrated National Security and Waterways Protection Infrastructure, also known as the Deep Blue Project. The country’s leaders gathered to show off some of the $195 million of equipment that will be used in a coordinated effort with its primary objective of securing Nigerian waters along the Gulf of Guinea and the country’s oil infrastructure with a coordinated combination of land, sea, and air forces.

Leading up to the launch ceremonies, Nigeria’s Maritime Security Unit (MSU) of the Deep Blue Project, comprising personnel from the Nigerian Navy, Nigerian Army, Nigerian Air Force, Nigeria Police, and Department of State Services, conducted simulation exercises. Their goal was to demonstrate their preparedness for full deployment to fight the ongoing menace of piracy, mostly emerging from the Nigeria's Niger Delta region.

According to Director General of the Nigerian Maritime Administration and Safety Agency (NIMASA), Dr. Bashir Jamoh, “With the deployment of the assets of the Deep Blue Project, we are entering another level of national security designed for total spectrum maritime security and better domain awareness using some of the latest technology. This effort to secure our waters will give Nigerians more leverage to harness the enormous resources of our maritime environment and aid the drive towards economic diversification.” 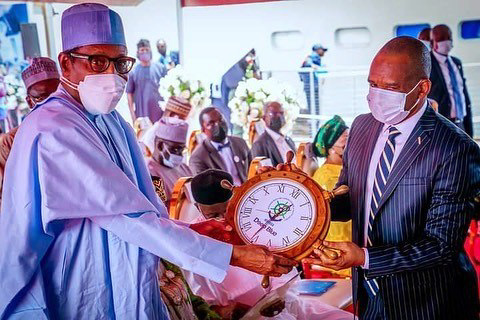 Security services have repeatedly warned recently of the increasing threats and dangers in the region from piracy. The Gulf of Guinea has seen the highest number of kidnappings and assaults on ships along with oil theft on land, robbery, and human and drug trafficking.

The Deep Blue Project is the first integrated maritime security strategy in West and Central Africa aimed at the ongoing threats of piracy and robbery. Among the assets that Nigeria will be deploying are 16 armored vehicles for coastal patrol, two special mission vessels, 17 fast interceptor boats, two special mission aircraft for surveillance of the country’s exclusive economic zone (EEZ), three special mission helicopters for search and rescue operations, and four unmanned aerial vehicles. The Maritime Security Unit is made up of 600 specially trained troops.

Coordinating the efforts, the Nigerians have set up a central command and control center based in Lagos, which will also liaise with other regional security efforts. Nigeria also admits that prosecution of suspected criminals was a challenge in the past, but says that the Suppression of Piracy and Other Maritime Offenses (SPOMO) Act passed by its National Assembly will now provide legal backing for prosecution and punishment of offenders.

In addition to questions if Nigeria has the political will to truly confront piracy, security analysts have highlighted that the pirates are becoming more brazen and violent in their attacks. In January 2021, four armed assailants staged an attack on a box ship which was called the attack was well-coordinated and sophisticated that resulted in the death of one member of the crew and the abduction of 15 others. Recently, concerns have been raised that the pirates have been going after more targets including regional fishing vessels and operating further offshore, sometimes more than 200 nautical miles away from their camps in the Nigerian Delta.

While it is several years since plans for this initiative were first announced, the shipping industry welcomed the official launch of the program. In a joint statement from the leaders of shipping industry associations, the International Chamber of Shipping, INTERTANKO, INTERCARGO, and BIMCO as well as the Oil Companies International Marine Forum, they congratulated Nigeria expressing their hope that it “will seriously impact on the ability of pirate groups to prey on merchant shipping.”

In May, responding to growing concerns and increasing attacks in the region, a task force of stakeholders from across the shipping industry released the Gulf of Guinea declaration on the Suppression of Piracy. Since the release of the declaration three weeks ago, over 320 organizations across the maritime industry including flag state administrations, ship owners, charterers, and shipping associations, all signed on committing themselves to tangibly supporting anti-piracy law enforcement efforts, all aimed at finally bringing an end to the dangers of shipping in the Gulf of Guinea.