A number of shipbuilding innovations have been unveiled at Marintec China, being held from December 5 to 8 in Shanghai. Started in 1981, Marintec China has become an important event for the international maritime community and its understanding of Chinese shipbuilding, offshore equipment and related markets.

GTT and Dalian Shipbuilding Industry received approval in principle from Lloyd’s Register for their 30,000m³ ballast-free B-FREE LNG carrier design at Marintec China. Savings in build cost are expected through the avoidance of fitting a ballast water treatment system and not having to comply with the Performance Standard for Protective Coatings (PSPC) for ballast tanks, ballast piping, pumps and values. Operational savings should be seen from not having to, for example, run and maintain a ballast water treatment system, ballast systems and maintain ballast tank coatings. Initial predictions also show lower fuel consumption compared to standard designs as well as lower LNG boil-off due to the GTT membrane, compared to a Type C tank.

Dalian Shipbuilding Industry has received Approval in Principle from DNV GL for new shuttle tanker and semi-sub crane unit designs. The new 127,000 DWT shuttle tanker design is targeted for operation in the North Sea and on the Norwegian Continent Shelf. The design features DP2 capacity and a twin propulsion system, and is already in compliance with EEDI Phase 3 regulations.

The DSCU12000 design for a column-stabilized crane unit with dynamic positioning system is equipped with two rotary heavy-lift cranes and an S-Lay pipe laying system, and is capable of performing heavy lifting and pipe laying operations in moderate to harsh environments, including offshore U.K. and in the North Sea. The design is based on DNV GL’s +1A Column-stabilized Crane Unit DYNPOS-AUTRO Crane-offshore class notation and adheres to the latest DNV GL offshore standards and the IMO MODU (Mobile offshore drilling units) Code. 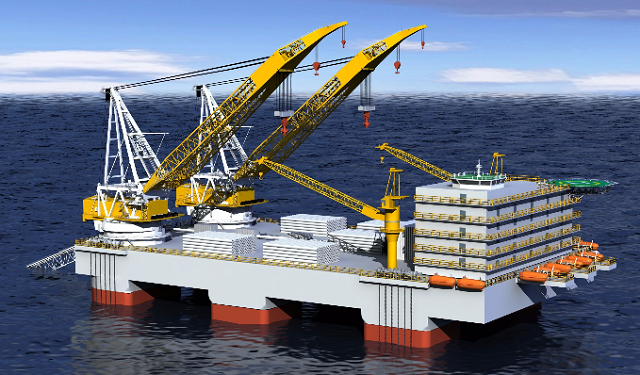 Wärtsilä has adapted its hybrid tug design to specifically meet the needs of the Chinese market. This version of the Wärtsilä HYTug has received an Approval-in-Principle recognition by the China Classification Society.

Since they typically operate in or close to harbors and populated areas, tugs are particularly affected by environmental considerations, and the need for regulatory compliance is an increasing concern for tug owners and operators worldwide. When operating in 'green' mode, it is unlikely that there will be any visible smoke from the HYTug since the load is being picked-up by the batteries. Additionally, noise levels are expected to be notably reduced.