A prototype project for a new concept in floating wind technology is preparing to launch in the Canary Islands. The developers of the technology, X1 Wind, believe that it can significantly enhance the performance of floating wind producing cost competitive energy. The patented technology combines the use of a new mooring system along with advancements in the operation of wind turbines.

The concept was initially developed in 2012 while Carlos Casanovas, today X1 Wind’s CTO and Co-Founder, was studying at the Massachusetts Institute of Technology. The company was launched in 2017 to commercialize the technology that integrates the mooring and anchoring system with the electric cable in a single point mooring that allows faster connection of floating platforms. By using a single point mooring, the PivotBuoy system allows floating platforms to align itself passively with the wind, eliminating the need for an active yaw actuator and active ballast systems. It reduces the weight and maintenance requirements in those systems. Combining the single-point mooring with a tension-leg mooring also enables further weight reduction compared to systems using catenary moorings.

The use of the PivotBuoy, the company also believes, will permit it to overcome another significant challenge limiting the growth of the size of wind turbines. According to X1, as blades have become larger and longer there is an increased challenge to avoid tower strikes. Companies have been exploring changing the tilt angle, which has created generation inefficiencies, as well as increasing the distance between the blades and tower, bending the blades, or stiffening them, which increases the cost of production.

X1’s solution is to switch from an upwind to a downwind configuration, with the nacelle facing the wind. Historically the drawback was a phenomenon known as tower shadowing, but the PivotBuoy has been designed to minimize this effect. According to the company, by having a floating platform instead of a fixed structure, it is possible to allow the whole structure to weather-vane and orientate passively with the wind. They believe this will make it possible to avoid large towers and can unlock potentially lighter and more flexible designs, that could lead to the development of truly gigantic wind turbines. 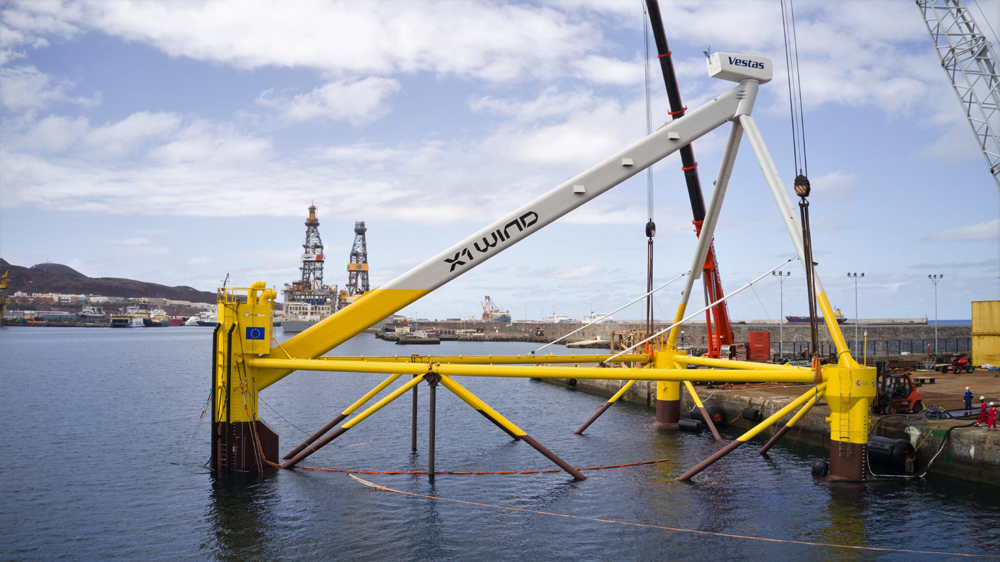 Construction of the X30 Platform was completed last November by DEGIMA in Santander, Spain before being shipped in segments to Gran Canaria. Structural assembly was recently completed and portside testing of all subsystems will be performed over the coming weeks.

In the next phase of the program, the 1:3 scale prototype fitted with a Vestas V29 turbine will be installed in the Plataforma Oceanica de Canarias (PLOCAN) test site located off the eastern shore of Gran Canaria. The prototype will be stationed at a 50-meter water depth using the single-point mooring system in a downwind configuration. It will be connected via a dynamic 20kV cable, with the timing of the commissioning phase determined by environmental conditions.

“This is a significant step forward for X1 Wind, preparing the way to demonstrate how our innovative technology can deliver dramatic cost savings and firmly position floating wind as a competitive green energy resource,” said Raventos. “We have a clear trajectory with funding secured to design and certify our technology at full-scale. This will allow us to move swiftly in the short term through the pre-commercial phase.

The project started in April 2019 and will last for 36 months. The prototype was developed through a $4.8 million grant from the European Commission H2020 Program and includes a consortium of companies including companies EDP NEW, DNV, INTECSEA, ESM, and DEGIMA and world-class research centers WavEC, PLOCAN, and DTU.