Engineers from MAN, Braemar Technical Services and four other maritime firms have produced a novel concept for a zero-emissions superyacht, deploying an all-of-the-above selection of green technology.

The concept vessel draws on all forms of renewable maritime power and incorporates use of wind, solar, hydro and thermal energy. Its DC electric bus is fed by multiple power sources - hydrogen fuel cells, solar panels, lithium ion battery banks, wind turbines and a thermal recovery system - and can accommodate other inputs as well as technology evolves.

A liquid hydrogen tank system supplies enough fuel to carry the 65-meter yacht design for a range of up to 4,000 nm at 12 knots. For further range and energy efficiency, the design incorporates a bow-mounted SkySail towing kite. The SkySail has an automatic steering system to keep it aligned and oriented properly, and can run in wind conditions between Beaufort 3-8. With the right wind and the right course, it can reduce fuel consumption between 10 and 35 percent. Wind-generated electrical power comes courtesy of six vertical-axis wind turbines of 20 kWh each. 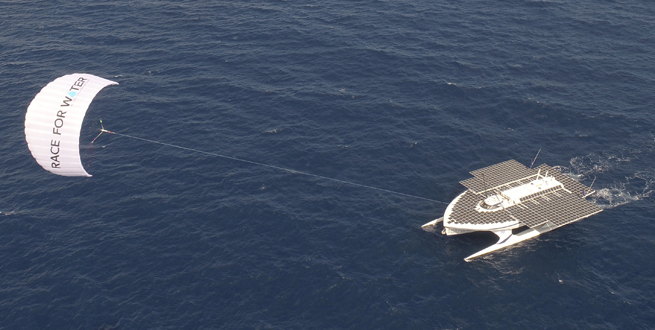 When the concept vessel is anchored, its DP thrusters can be configured to act as hydroturbines to generate power from the prevailing currents. This can be used to recharge the vessel's batteries or to generate hydrogen by electrolysis (if fitted with an on-board hydrogen generator).

A large part of the design team's approach to zero emissions rests upon weight savings. Every tonne left on shore is a tonne less that needs to be moved, reducing energy requirements. To this end, the superstructure is made of carbon fiber, and even the furniture uses honeycomb construction to cut down on mass. The use of hydrogen fuel also helps: when used in combination with a fuel cell, hydrogen has a much higher usable energy content per pound than diesel, according to the design team.

Edward Eastlack is a senior marine engineer with AqualisBraemar. He has a passion for new technologies that improve safety, reliability, efficiency and the environmental impact of marine assets. He spent the first ten years of his career as a licensed marine engineer and another ten years taking on sophisticated marine projects, including vessel upgrades, repairs, refits and newbuild construction. He holds both a bachelor's degree and a masters of science degrees in marine engineering from the United States Merchant Marine Academy.