Authorities in the Netherlands intend to seek damages from number-two ocean carrier MSC for the cleanup costs stemming from the container ship MSC Zoe's recent cargo loss. They have also opened a criminal inquiry into whether the casualty was the result of any criminal acts - in particular, whether the country's domestic Pollution Prevention Act may have been violated. The inquiry is expected to last at least several weeks.

270 containers fell off the Zoe in heavy weather off the coast of the Netherlands on Wednesday. The incident occurred near the German island of Borkum, and the containers floated south-west, towards the Dutch island of Terschelling.

About 35 missing containers have been found to date, and  and the loose cargo is still washing up on the islands of Terschelling, Vlieland, Ameland and Schiermonnikoog. Most of the debris is relatively benign - plastic toys, blankets, shoes, tires, furniture, packaging and other sundry goods - but the volume is significant. Residents and sightseers have visited the scene to remove items of value, but the balance of undesired cargo will have to be disposed of. Images of the scene show beaches heavily littered with plastics and debris. Local volunteers are assisting with the work, and about 100 Dutch troops have been deployed to assist with the cleanup.

"First, we thought it was funny," said visitor Beau Oldenburg, speaking to CNN. "I even found a pair of sandals that fit my size and kept them. But then we realized it was actually a catastrophe."

One missing container was carrying dangerous goods: 280 bags of dibenzoyl peroxide powder, which can pose a danger to human health in large quantities. Two bags have already been found and safely removed, and the authorities have warned residents and cleanup crews not to touch anything resembling the hazardous bags. An official hotline was briefly overwhelmed with calls after comparably-shaped bags filled with plastic beads washed up on shore, and an additional bulletin was issued with specifics about the hazardous material's packaging (below). 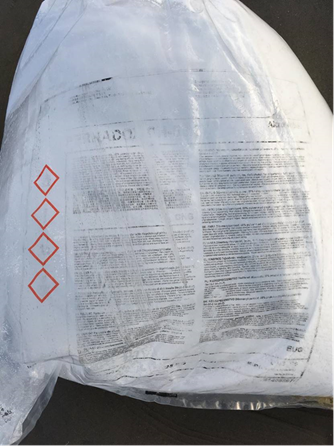