The U.S Navy is grappling with a huge dilemma on what to do with the decommissioned USS Enterprise, the world’s first nuclear-powered aircraft carrier and the pride of the Navy for 50 years from her commissioning in 1961 to her deactivation in 2012. Officially decommissioned in 2017, she sits in Virginia costing millions of dollars annually in maintenance costs but could require more than a billion dollars and up to 15 years to safely dismantle.

Having been the embodiment of the U.S military might not only because of its sheer size, which earned her the nickname “Big E” she became the centerpiece of the modern Navy. The first U.S. Navy nuclear-powered aircraft carrier, Enterprise was commissioned in 1961 and participated in critical missions including the blockade of Cuba during the 1962 Missile Crisis, a circumnavigation of the globe without refueling, participation in the early space program tracking John Glenn’s orbit in the Friendship 7 capsule, deployment during the Vietnam War and continuing to more recent roles in the Mediterranean and Persian Gulf.

In the first phase of her decommissioning, the Navy addressed her eight reactor plants housed in four reinforced compartments. As part of the process, the nuclear fuel was removed from the eight reactors but since then the ship has remained at Newport News Shipbuilding in Virginia. At its current location, workers are tasked with maintaining and inspecting the carrier undertaking tasks from protecting the vessel from water intrusion to addressing flaking paint, leaks, and other threats. 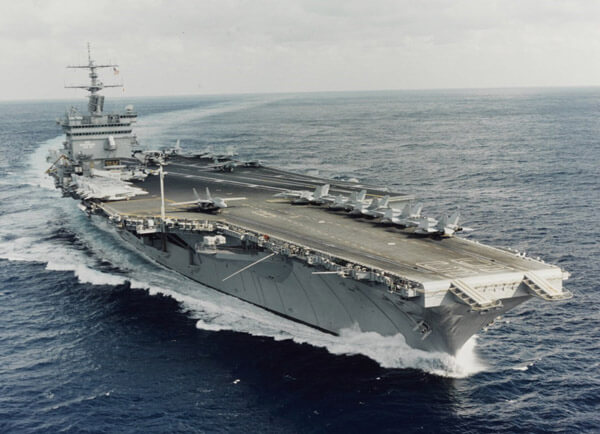 Underway probably in the 1990s

In an effort to resolve the fate of the carrier, the Navy drafted a 586-page report exploring the pragmatic options to deal with the vessel. The Draft Environmental Impact Statement/Overseas Environmental Impact Statement for Disposal of Decommissioned, Defueled Ex-Enterprise (CVN 65) and its Associated Naval Reactor Plants report identifies four options for the vessel’s fate. In the next phase, the Navy is asking for public input during a 45-day public scoping period.

“The Navy is committed to facilitating public and agency participation and input to ensure a complete environmental analysis and to make informed decisions. Public input and involvement are fundamental aspects of the National Environmental Policy Act (NEPA) process,” said the Navy in the report.

The Navy, in its draft report, proposed that one option is simply no action. That means the ex-USS Enterprise would not be dismantled or disposed of and would be placed in waterborne storage for an indefinite time at its current location. This, however, would include maintenance and inspection work to prepare the ship for indefinite waterborne storage in a safe and environmentally acceptable manner. Even with the ”no action” option, the Navy would incur a bill of $10 million annually because it would require periodic maintenance to ensure that storage continues in a safe and environmentally acceptable manner.

Letting the Enterprise sit in Newport News is ideally not what the Navy wants because it’s bound to pose challenges in the future as it continues to degrade. The maintenance costs would increase as the vessel ages and the hull deteriorates, requiring repairs to ensure watertight integrity.

“The No Action Alternative only delays the ultimate permanent disposal of ex-Enterprise, as dismantlement is required by Navy policy. Waterborne storage is not a permanent solution and is considered satisfactory only as an interim measure,” notes the report.

For this reason, the Navy has proposed three other options, two of which involve partial dismantling in partnership with the private sector and one that involves complete dismantling by a private contractor. 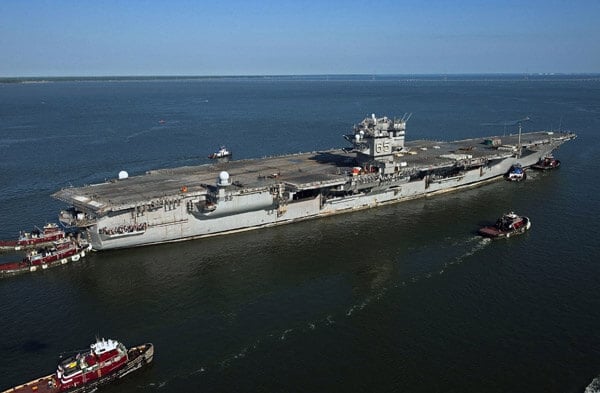 Deactivated she was shifted to Newport News SB in 2013

The two alternatives to partially dismantle her would include towing the Enterprise to an authorized commercial dismantlement facility either in Texas or Alabama, where it would be partially dismantled by removing areas of the ship outside of reactor compartments, leaving a propulsion space section (about one-third of the aircraft carrier’s original weight and length). The dismantling work would be managed under the Navy contract process. These options are projected to cost between $1.1 billion and $1.3 billion each and would take 15 years to complete.

It adds that several civilian, land-based, defueled reactor plants, which are larger than Navy aircraft carrier reactor plants, have successfully been dismantled and disposed of by the commercial radiological services industry.

In the meantime, the Big E waits at the shipyard in the shadow of her successor. Two weeks ago, HHI hosted the official keel laying ceremony for CVN 80 at its Newport News Shipbuilding division. CVN 80 scheduled for completion in 2028 is the third Gerald R. Ford-class aircraft carrier and has been given the name Enterprise.