MSC’s new giant boxship was floated out by its Chinese shipbuilders as the carrier continues its rapid expansion. Despite the current slowing in volumes and rapid decline in freight rates, MSC is continuing its build-out of its fleet at a record pace. Already the largest containership operator, the carrier has orders equaling 40 percent of its current capacity and continues to buy secondhand vessels.

The 233,000 dwt MSC Celestino Maresca was floated out from the dry dock at China’s Hudong Zhonghua on October 11. She is the second of a class of four giant containerships, which will be the world’s largest by capacity being built by the shipyard for MSC. The line has four similar ships also on order from China’s Jiangnan Shipyard. The vessels are due for delivery starting at the end of 2022 and in 2023.

The MSC vessels along with others built by Hudong including for COSCO and Evergreen all have similar dimensions with an overall length of 1,312 feet and a beam of 202 feet. The design was independently developed by the shipyard but changes in the deckhouse and container stacks will increase the rated capacity of the MSC ships to make them the largest at 24,116 TEU. According to the shipyard, the stacks permit boxes to be placed in up to 25 layers on a deck that reaches the length of four standard football fields. 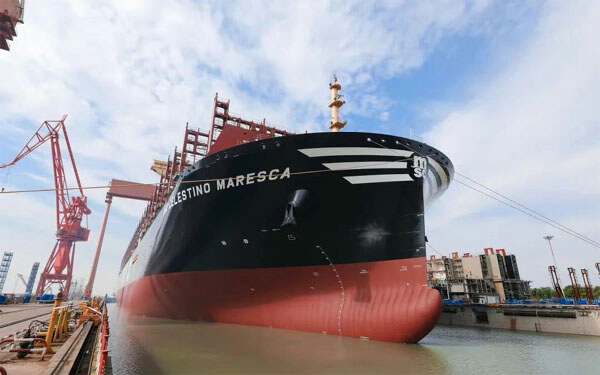 MSC chose standard fuel for the vessels not electing LNG or designs future ready for alternative fuels. However, the shipyard reports that it incorporated multiple features into the design of the vessels to enhance operating efficiency and reduce emissions. They have a small bulbous bow, large diameter propellers, and energy-saving ducts. The first of MSC’s vessels, the MSC Tessa, is also the first newly built ship for the line and the shipyard to employ an air lubrication system for the hull which they estimate will reduce fuel consumption by three to four percent. The design also used a shaft generator system to reduce fuel consumption and optimize the vessel’s EEDI energy efficiency rating. They are also outfitted with a hybrid scrubber unit.

These eight ultra-large container vessels are part of an order book for MSC that totals 1.76 million TEU according to Alphaliner’s calculations. The company’s current capacity is just over 4.5 million TEU giving it a nearly 18 percent share of the industry. 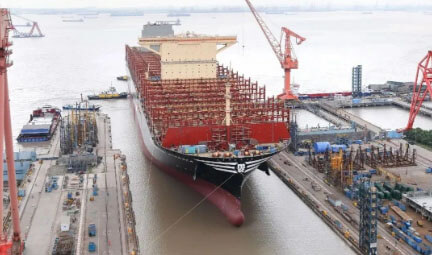 While overall new containership orders have slowed in 2022 after the record pace last year, MSC is continuing to move forward with its orders. Last week, Chinese shipbuilder Yangzijiang Shipbuilding confirmed that it had received a new order valued at nearly $2.2 billion from MSC. The order is for a dozen 16,000 TEU containerships. The vessels will be delivered in 2024 and 2025. These will be dual-fuel LNG ships.