Japan’s Mitsui O.S.K. Lines is funding the development of a new-generation marine exhaust treatment system specifically for use on its car carriers to meet the pending air pollution regulations in California, which include extending current at-berth regulations to nearly all ships using the state’s ports. MOL will be working with a California-based company Clean Air Engineering Maritime to promote the development and use of this exhaust treatment system as a new means to prevent air pollution while also studying the use of shore power to meet the California regulations.

The California Air Resources Board (CARB) launched its At-Berth Regulation in 2007 with the initial focus being on containerships, reefer vessels, and cruise ships. In 2020, they estimated that the regulations resulted in an 80 percent reduction in harmful emissions from more than 13,000 vessel visits since 2014 leading CARB to adopt new rules to expand the regulations to car carrier vessels by 2025. Tankers docking at the Port of Los Angeles and the Port of Long Beach must also comply starting in 2025, while tankers in Northern California have until 2027 and recently CARB took the controversial move to further expand the regulations to most harbor craft including commercial passenger fishing vessels, pilot vessels, tank barges over 400 feet, workboats, and research vessels. 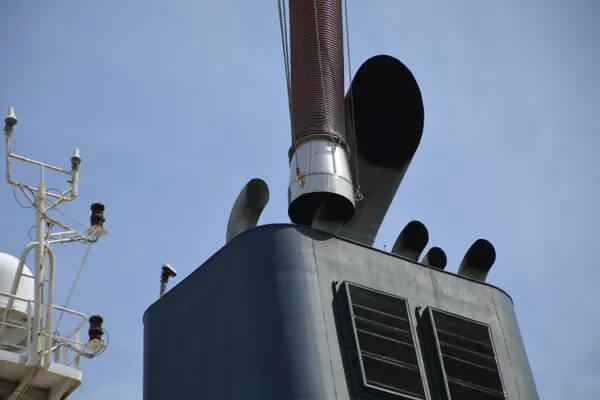 Clean Air Engineering Maritime has been providing services at the Port of Los Angeles, California, since 2015, when it became the first company to receive CARB approval for a barge-based marine exhaust treatment system that captures and treats air pollutants exhausted from the ship's stack. The company’s system, which is based on barges that are positioned alongside and attached to the funnel, is currently the only exhaust capture and treatment service in compliance with the CARB At-Beth Regulation. They have serviced over 400 vessels, focusing currently mostly on containerships,

MOL reports that its car carriers make more than 70 port calls annually in California. In cooperation with CAEM, MOL will join the development of a new system for car carriers that reduces emissions and meets the pending CARB regulations.

California has an ongoing enforcement program for its at berth regulations closely monitoring ships calling at its ports. In 2020, MOL agreed to pay $253,300 in penalties to CARB for violating the Ocean-Going Vessel At-Berth Regulation. According to CARB, audits of the company’s 2017 and 2018 vessel fleet visits to the Port of Oakland revealed that MOL was not meeting the three-hour diesel engine operational time limits. CARB said that the ships failed to meet the requirement to reduce by 70 percent auxiliary engine power generation.

In making its case for expanding the At Berth Regulation to car carriers and tankers, CARB cited data saying that these two classes of ships produce 56 percent of all fine particulate pollution from ocean-going vessels at berth in California ports. Once fully implemented, the updated regulation they said will deliver a 90 percent reduction in pollution from an expected additional 2,300 vessel visits per year.