Japan’s Mitsui O.S.K. Lines working with Japan Engine Corporation is seeking to develop and test possibly the world’s first hydrogen engine on one of its in-service dry bulk carriers. The engine development project was selected by the government’s New Energy and Industrial Technology Development Organization (NEDO), for inclusion in its Green Innovation Funding Program. It is also part of MOL Group’s goal of deploying net-zero emissions ocean-going vessels in the 2020s.

This project will seek to demonstrate the first two-stroke hydrogen-fueled marine engine, which will be developed by J-ENG. They will work in cooperation with Kawasaki Heavy Industries and Yanmar Power Technology Co. to produce the hydrogen-fueled engine.

Once completed, the engine which they aim to make as the world's first low-speed, two-stroke hydrogen-fueled marine engine for large ocean-going or coastal vessels, will undergo trials aboard one of MOL Drybulk’s in-service vessels. No timeline was supplied for when they expect to begin trials. 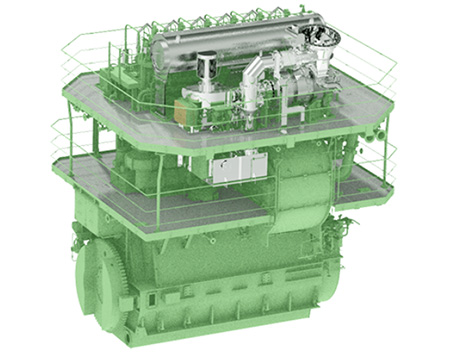 NEDO has recently announced funding for several projects all designed to develop alternative-fuel power plants. One project seeks to develop the first ammonia-fueled engine by 2024 for testing on a tugboat using mixed combustion with standard fuels. Two years later in 2026, they plan to test a larger ammonia-fueled engine on an ocean-going ammonia gas carrier. Other projects are exploring hydrogen as well as an effort to reduce methane slip from LNG-fueled engines.

The world’s leading engine manufacturers, including MAN and Wartsila, are all proceeding with research efforts to develop alternative fuel engines. Wartsila reported this summer that it has made strong progress saying it expects to have a marine engine capable of running on an ammonia blend available this year. Wartsila set a target for having an engine concept with pure ammonia fuel in 2023 and aid that it believes this will lead to an engine and plant concept for pure hydrogen operation for the energy market by 2025.