After passing by Florida with little effect, Hurricane Dorian has headed for the Mid-Atlantic, bringing wind and rain to Georgia and the Carolinas. A hurricane warning is in effect for the coasts of South Carolina, North Carolina and southern Chesapeake Bay, after which the storm is expected to head out to sea.

While it is now much reduced from its peak intensity, Dorian remains a powerful Category 2-3 storm. It is expected to arrive off South Carolina on Thursday and North Carolina Friday, and there is a possibility that it could make landfall in the region: the National Hurricane Center (NHC) noted that even small track deviations to the west could bring it ashore in the Carolinas. Regardless of a potential landfall, its effects will likely include dangerous winds and storm surge along coastal areas of Georgia, South Carolina, North Carolina and the southern Chesapeake Bay. Heavy rain leading to flash flooding may also occur in coastal areas. On Friday, it is expected to continue to the northeast on a track that will take it over Nova Scotia. 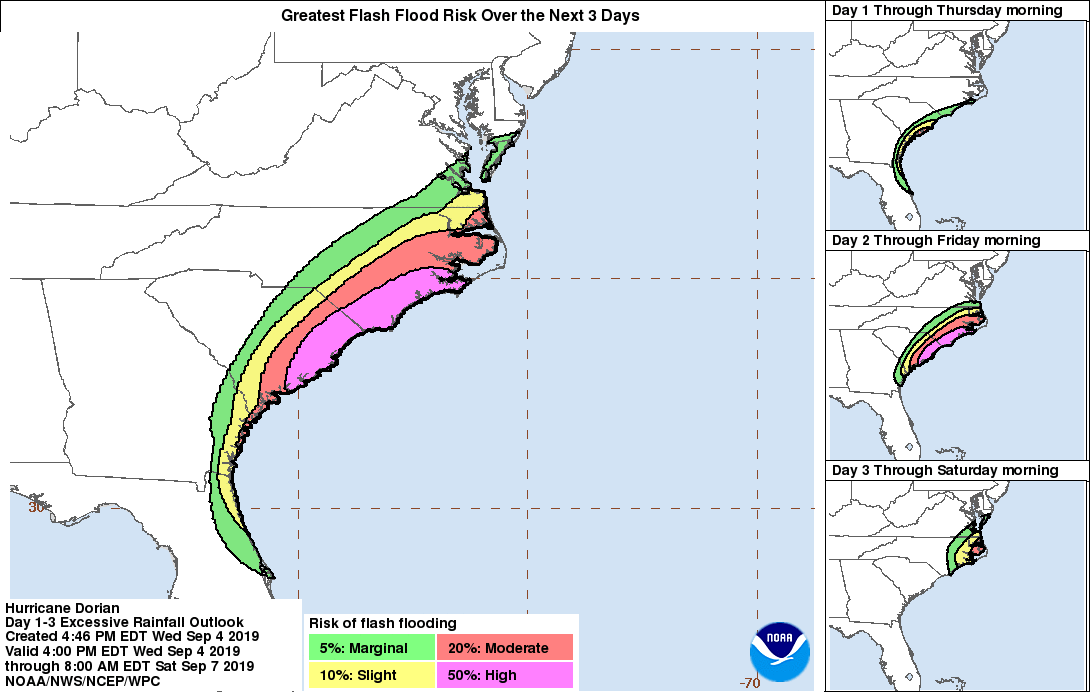 As predicted earlier in the week, the U.S. Navy's Hampton Roads-based ships are leaving port to avoid the high winds and heavy rains that Hurricane Dorian is expected to bring to the U.S. Mid-Atlantic coast. Vessels are leaving from Naval Station Norfolk and Joint Expeditionary Base Little Creek, and the Navy says that they will remain at sea until the threat from the storm subsides.

“Based on the current track of the storm, we made the decision to begin to sortie our Hampton Roads-based ships and aircraft,” said Vice Adm. Andrew Lewis, commander of  U.S. 2nd Fleet. “This allows time for our assets to transit safely out of the path of the storm.”

No evacuation orders for the base complex have been announced, but Rear Adm. Charles W. Rock, commander of Navy Region Mid-Atlantic, said that personnel should discuss potential evacuation plans with their chain of command.

The storm has forced the U.S. Coast Guard to issue port warnings and port closures from Florida north to Virginia. As of Wednesday morning, the USCG reported that the ports of Palm Beach, Port Canaveral, Jacksonville, Fernandina, Savannah, Brunswick and Charleston were closed as a precautionary measure (Port Condition Zulu).

On Wednesday, Mediterranean Shipping Company (MSC) issued a comprehensive customer advisory on port impacts for the U.S. Eastern Seaboard. According to MSC, terminal and gate operations have resumed in Tampa and Port Everglades. Though marine operations have resumed at PortMiami, shoreside terminal ops remained closed until Thursday. Two MSC network vessels, the Cape Tainaro and the Zim Rotterdam, have been affected by the storm: the Tainaro will omit her call at Wilmington, and the Rotterdam will omit her call at Jacksonville.