Silversea Cruises recently announced that it will convert its elite cruise ship Silver Cloud into an ice-class ship during an extensive refurbishment scheduled to start in August 2017. As an expedition ship, the Silver Cloud will then spend much of its time in Polar waters carrying a guest complement of 200 people.

The move follows other cruise lines’ expansion in to the Arctic. In August next year, Crystal Serenity will sail from Alaska, through the Canadian Arctic to Greenland and then New York with 1,050 guests and 650 crew members on board.

More people are wishing to explore icy environments, says Peter Hellberg, manager responsible for the SAR process at the Swedish Maritime Administration. Hellberg is part of an IMO/International Civil Aviation Organization (ICAO) working group that is re-evaluating search and rescue (SAR) operations in Polar waters as a result of this push.

The working group includes both a maritime and aeronautical perspective, and it has identified a need for more detailed guidance for SAR organizations which will be achieved through an update of the International Aeronautical and Maritime Search and Rescue Manual (IAMSAR) planned for 2019.

While the IAMSAR manual is not mandatory, it is followed by most SAR organizations around the world. It provides the framework for setting up a multi-national SAR, giving different parties guidance on the necessary arrangements for Arctic areas.

The guidance will be expanded on based on the Polar Code and other recent IMO regulatory updates, and from an aeronautical perspective, from lessons learned after the disappearance of Malaysian Airlines’ MH370.

“There is actually very little written in the IAMSAR manual about operational procedures in areas remote from SAR activities,” said Hellberg. “The Arctic is a remote area, and there is a lack of SAR facilities, a lack of rescue units, so if cruise ships go into Polar areas, they are very much reliant on themselves if there is a problem. It’s going to take time to reach them if they are in distress. It could take a couple of days to move assets to the location, and there is not so much written about the procedures to be used in this type of SAR operation in the IAMSAR manual.”

Hellberg says that, from a SAR perspective, the most important thing about the Polar Code is that it creates a framework and highlights the challenges that a ship and its crew will face when traveling in areas remote from SAR facilities.

“The IAMSAR, in three different volumes, is the SAR operational link between the Polar Code and ship safety. It is designed to make sure that the global SAR service has the operational capability to conduct a SAR mission in areas remote from SAR facilities, to give a global guidance for this and also to set a global SAR standard on how to do it.

Meanwhile, there is some work to follow up the Polar Code itself. IMO is working on the development of guidance on a methodology for determining limitations for operation in ice. An MSC correspondence group, under the coordination of Norway, is examining the Polar Operational Limit Assessment Risk Indexing System (POLARIS) developed by IACS which has been endorsed as one acceptable system for meeting the guidance. The correspondence group will report on the matter to MSC 96 in May 2016.

Also, there are additional performance standards that are yet to be included in chapters 8 (Fire safety/protection) and 9 (Life-saving appliances and arrangements) of the Polar Code. The Sub-Committee on Ship Systems and Equipment (SSE) has been instructed to consider the issues and advise MSC 97 on the best way to proceed. 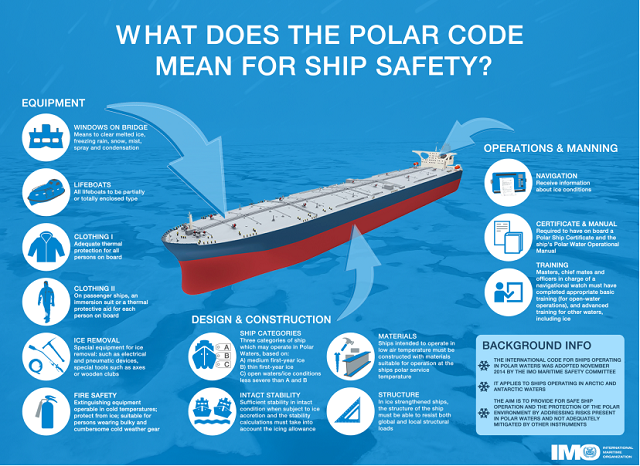