Germany’s Meyer Werft completed the float out of a new 144,000 gross ton cruise ship being built for Disney Cruise Line. The ship marked the milestone event leaving the building hall on February 11 after 10 months of assembly as it prepares for its maiden voyage scheduled for July 2022.

“We are pleased to have reached a further step towards the completion of the ship with the undocking," said Jan Meyer, Managing Director of Meyer Werft. “It will then be the fifth ship that Meyer Werft will have delivered during the corona pandemic. We are convinced that the Disney Wish will surprise the cruise industry and Disney fans with a number of special features.”

Construction on the Disney Wish began in April 2021 when the first block was placed in the building hall dry dock in Papenburg, Germany. By July 2021, work had already progressed to the placement of the funnels atop the ship and in August the last block was mounted onto the ship. Meyer has developed proprietor techniques for the rapid assembly of large cruise ships.

In addition to being LNG-fueled, the three new ships will expand on the unique design skills of Disney which employs its “imagineers” to outfit the ships. On its earlier cruise ships, Disney introduced a water coaster ride and “virtual portholes” that feature video images of the sea along with “sightings” of Disney characters. The new ships will reportedly set new industry standards in areas including digital media and stage engineering.

Reflecting the company’s focus on the family cruise market, each ship will have 1,254 staterooms while accommodating a total of approximately 4,000 passengers plus a crew of 1,555. Unique features include a two-level 2,000-square foot penthouse suite in the forward funnel that sleeps up to eight passengers. They are also introducing a water ride that is being billed as the first-ever Disney attraction at sea. The interior decor theme is enchantment and will draw on Disney’s characters ranging from "Cinderella," “Moana,” and “Sleeping Beauty,” as well as featuring dining experiences with characters from the movie Frozen and superheroes from Marvel Comics.

Disney recently delayed the maiden voyage of the new ship by six weeks reporting it was due to Covid-related complications in the construction process. The Disney Wish will continue her fitting out at the Meyer Werft pier before its conveyance on the River Ems. The maiden voyage is now scheduled for July 14, 2022, and the cruise ship will be operating three- and four-night cruises from Port Canaveral, Florida to Nassau, Bahamas, and Disney’s private island, Castaway Cay. 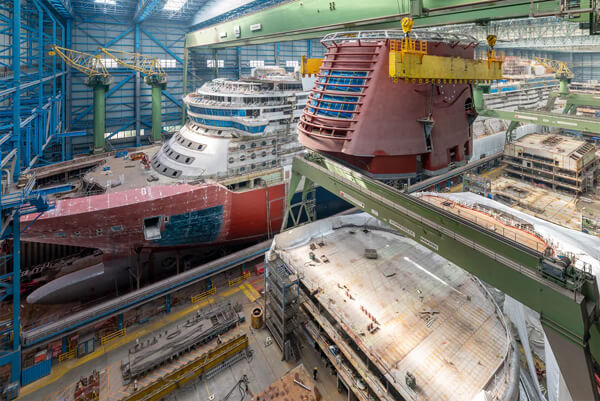 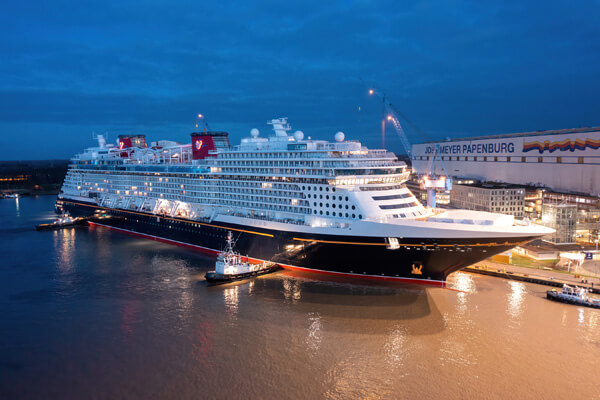