Two maritime pilots who defied fire to bring a burning ship to safety, averting a major maritime catastrophe, received the 2017 IMO Award for Exceptional Bravery at Sea during the 2017 IMO awards ceremony, held on November 27.

Pilots Captain Michael G. McGee and Captain Michael C. Phillips, from Houston, were recognized for their role in averting a major tragedy in September 2016. The ship they were piloting, the 247 meters-long tanker Aframax River, broke down in the Houston Ship Channel in the middle of the night and burst into flames after colliding with mooring dolphins.

McGee and Phillips were surrounded by a towering wall of burning fuel as the raging fire quickly spread across the channel, threatening other tank ships and nearby waterfront facilities. Both pilots remained at their stations on the bridge of the ship during the fire. McGee managed to maneuver the stricken and blazing vessel away from surrounding ships and facilities. Phillips coordinated communications and firefighting efforts with the U.S. Coast Guard and numerous local fireboats. He also rushed to grab a fire extinguisher and put out a fire raging on the port bridge wing. 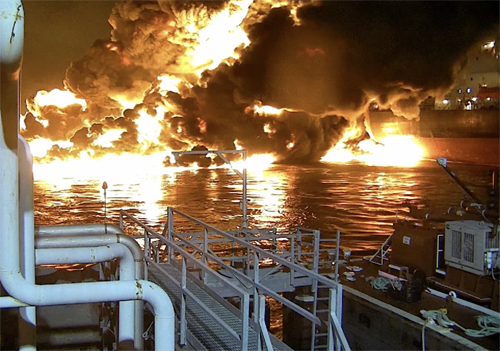 The inferno was finally extinguished after 90 minutes, leaving both pilots exhausted and suffering minor burns. McGee, using tugs, was then able to bring the damaged tanker safely to a mooring facility.

McGee and Phillips were nominated by the International Maritime Pilots' Association (IMPA). The Award was decided by a panel of judges and endorsed by the IMO Council at its 118th session in July.

Presenting the pilots with medals and certificates, IMO Secretary-General Kitack Lim said they had been faced with a challenge which was out of the ordinary and required great initiative and heroism.

Accepting the Award, Phillips said: “It’s also not something that we train for or practice. Frankly, we didn’t have a lot of time to even think about what we needed to do. We just did it.

“We’d like to think, however, that we did what we did in large measure because we’re state pilots. We’re used to taking control when we climb aboard a ship. Pilots don’t sit back and wait for others to tell them what to do. We also feel a deep responsibility for protecting our port. We are proud to be state commissioned pilots and proud of what state pilots do in safeguarding their respective ports. In that respect, we accept this award on behalf of our fellow pilots in Houston and everywhere else in the world,” he said.

During the award ceremony, certificates of commendation were also awarded to the following:

Boatswain’s Mate First Class Jacob M. Hylkema, crew member of the 52-foot motor life boat Invincible, United States Coast Guard. He was nominated by the U.S. for risking his own life in rescuing the master of the sailing vessel Grace during rough seas, driving rain and string winds off the west coast of the U.S. near Westport, Washington, one night in October 2016.

Vice-Captain Damir Rikanovic (a Croatian national) and Marina Team Leader Kurt Dreyer (a German national), crew members of the passenger ship Crystal Esprit. They were nominated by the Cruise Lines International Association (CLIA), for rescuing, at great risk to themselves, eight people from the catamaran El Diablo which had been grounded on a reef off the Seychelles Islands during severe weather in February 2017.

Lee Gwang Hee, Chief Engineer of the fishing boat 2015 Bogyeongho. He was nominated by the International Transport Workers’ Federation (ITF) for his courage and determination while fighting a fire that had broken out in the engine room of the fishing boat which was off the coast of the Republic of Korea at the time. The fire was quickly spreading. After initially being unable to put out the fire, Lee, a national of the Republic of Korea, courageously re-entered the engine room, closing ventilators and the entrance door, and extinguished the fire, saving the lives of his fellow seafarers.

Letters of commendation have been sent to:

Captain Patrick Norrgård and the crew of the M/V Norstream, nominated by Finland, for rescuing seven crew members of the sunken cargo vessel Fluvius Tamar.

Captain Amir Janbod (posthumously), Master of the M/V Golafruz, nominated by Iran, for his role in the rescue of eight crew members of the yacht Trekker II. Janbod passed away on the Golafruz three days later, following a heart attack.

The crew of the fast rescue boat Kiyem 5, Turkish Directorate General of Coastal Safety, nominated by Turkey, for rescuing all 10 crew members of the sailing boat Acadia 7.