The Marine Accident Investigation Branch has released its report on two groundings involving the bulker Ocean Prefect at Ahmed Bin Rashid, UAE, and found that the pilots' lack of local knowledge was a leading factor in the back-to-back accidents.

On June 10, 2017, as the Prefect approached the port at Umm Al Qaywayn, UAE, she went aground. She not damaged and was refloated after 12 hours, but she grounded again the following day as she made a second attempt to enter the port, breaching three of her ballast tanks. Two pilots were on board during both groundings.

MAIB claimed that several factors led to the accidents: first, the pilots had "very limited local knowledge;" a tidal set contributed to the groundings; the tidal stream data for the port’s approaches was very limited; the positions of the navigation marks used to indicate the limits of the port’s approach channel were potentially misleading; and the port in Umm Al Qaywayn "lacked resource and marine expertise."

At 1200 hours on June 10, the Ocean Prefect weighed anchor and headed for the pilot station for Ahmed Bin Rashid Port. Two pilots transferred over at 1224 and she began her passage into the port. Conditions were good, with light winds and good visibility. The pilots had noticed a tidal set during their last outbound transit but expected that it would be minimal during the Prefect's approach.

At 1256, as the vessel entered the port's narrow approach channel, the pilot reduced speed to dead slow ahead, and the master noted that the vessel was "drifting to starboard." While the bridge team did not know it, the tidal stream at the time of the transit set to the west at up to one knot, and the course she steered to port was not sufficient to offset the set to starboard.

Two minutes later, the echo sounder's alarm went off. The pilot ordered a course change of 20 degrees to port and increased engine speed to half ahead. At 1302, the vessel's speed over ground fell, and the master suggested that she had probably gone aground. A reconstruction by the MAIB found that the Prefect had drifted outside of the western bound of the approach fairway and had found a shoal. 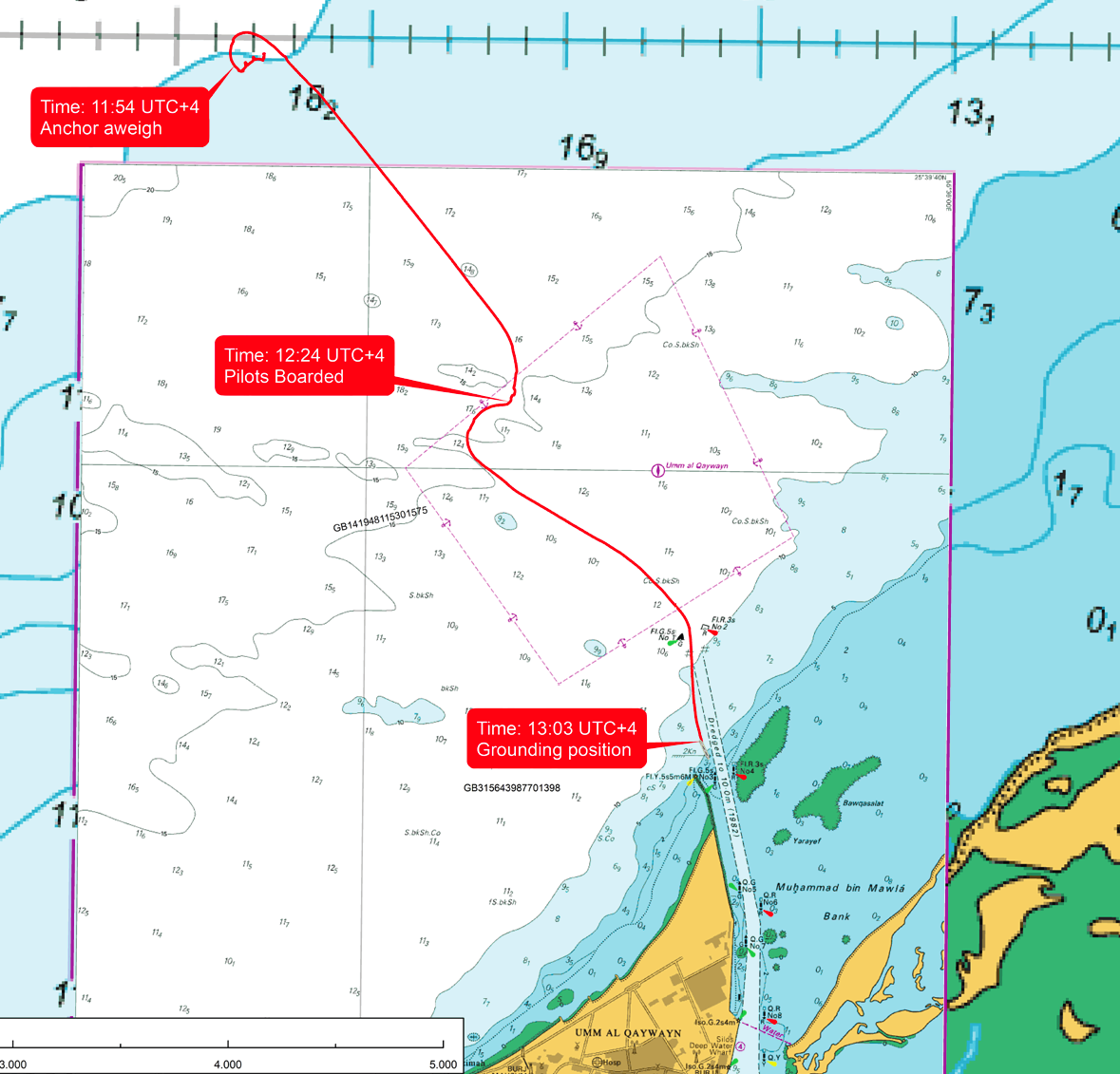 Within several minutes, the crew of the Prefect sounded the tanks and determined that there were no signs of a breach. The pilots and the ship's agent made arrangements for three tugs to assist with a refloat attempt, and the bulker was successfully refloated at 0115 the next morning. She returned to the anchorage and discharged ballast water in preparation for a second attempt to enter the port.

At 1300 on June 11, the Prefect - with the same two pilots on the bridge - began her second approach to Ahmed Bin Rashid. The master and the pilots agreed to stay to the east side of the channel to minimize the risk of getting set to the west.

At 1340, as she passed the location of her first grounding, the two pilots gave the helmsman conflicting starboard helm orders. Moments later, at 1341, the ship experienced heavy vibration and her speed fell abruptly. The master ordered half ahead, and the Ocean Prefect continued to move forward towards the port.

The chief officer sounded the vessel's forward tanks and found that port side ballast tanks 1, 2 and 3 were flooding. The Prefect took on a port side list of about three degrees, but she made it to her berth without further incident.

A dive inspection found extensive hull damage, including a gash of nine meters long by 0.2 meters wide. In a note of protest, the master suggested that the vessel had struck "some hard object (under water)" on her port side as she passed near the spot of the previous grounding.

The two pilots, both Indian nationals, were on their second and third pilotage transits of the Ahmed Bin Rashid channel at the time of the incident. Their first transit had occurred the morning of June 10, just before they boarded the Prefect, and MAIB found that they did not have access to recent survey data or tidal stream information. In addition, MAIB inferred that they likely were not aware of the extent of the shoals alongside the channel.

In conclusion, the agency suggested that a "more structured approach to pilot authorisation and the provision of tidal stream data and accurate visual references in the dredged channel, such as port entry marks, warrants consideration."

After the incident, the port authority awarded a concession to a leading professional ports operator for Ahmed Bin Rashid Port. It also made changes to regulate pilotage, provide navigational information to visiting vessels, control vessel movements and collect up-to-date hydrographic information on the approaches.