The UK's Marine Accident Investigation Branch has released the results of its inquiry into the collision between the UK-flagged hopper dredger Shearwater and her own tow, the barge Agem One, in April 2020.

At about 2000 hours on April 9, 2020, the Shearwater was under way on a long towing voyage around Scotland, bound from Glasgow to Eyemouth. She had the barge Agem One under tow alongside, on the hip, with an excavator secured on deck. Upon rounding Cape Wrath and entering the North Sea, the vessel encountered a long swell of about 10 feet, which made the tow configuration unsuitable. The vessel's owner - an experienced offshore marine professional with no officer's license and limited towing experience - ordered the crew to switch to towing astern.

An AB and the excavator stepped over to the barge and set up a bridle and an HMPE rope tow line. The tow line failed quickly, so the Shearwater went to retrieve the drifting barge. The line had failed at the point of connection to the bridle, and the hard eye was distorted, so the crew reconnected it with a bowline knot. It quickly it failed a second time. The owner and master consulted, and they made the decision to reverse course and seek shelter in Kinlochbervie. The crew made up the tow alongside once more.

In order to fit into the narrow harbor entrance, the owner decided to reconfigure the tow once more to pull the barge astern. During this evolution, the master went aft to help handle lines, leaving the owner in the pilothouse. The owner needed to put propulsion astern in order to maneuver, and he asked the AB if the towline was out of the water. The AB answered in the affirmative; however, the towline was not out of the water, and it fouled both of Shearwater's propeller shafts when the owner put the engines in reverse. One of the shafts was ripped out of the gearbox, and neither engine would clutch in.

Both vessels then began drifting north with the tidal stream at a speed of about one knot over ground. The master ordered the port anchor let go, and as it began to hold, Shearwater swung to face into the current. This brought the vessel's port side into contact with the barge, resulting in repeated heavy collisions. The crew attempted to resecure the barge alongside, but they were not successful. Eventually, the fouled towline parted and the barge drifted away.

The crew checked for damage from the collision, and they found flooding inside of the port buoyancy compartment, the void space between the hopper well and the shell plating. The owner reported the flooding to HM Coastguard at 2021, and multiple response assets were dispatched to the scene, including the Lochinver RNLI lifeboat and the towing vessel Ievoli Black. Meanwhile, the Shearwater's crew worked to pump out the void space with the bilge system and a portable emergency pump, but the equipment could not keep up with the rate of water ingress. Shearwater took on a list of about 5-10 degrees. 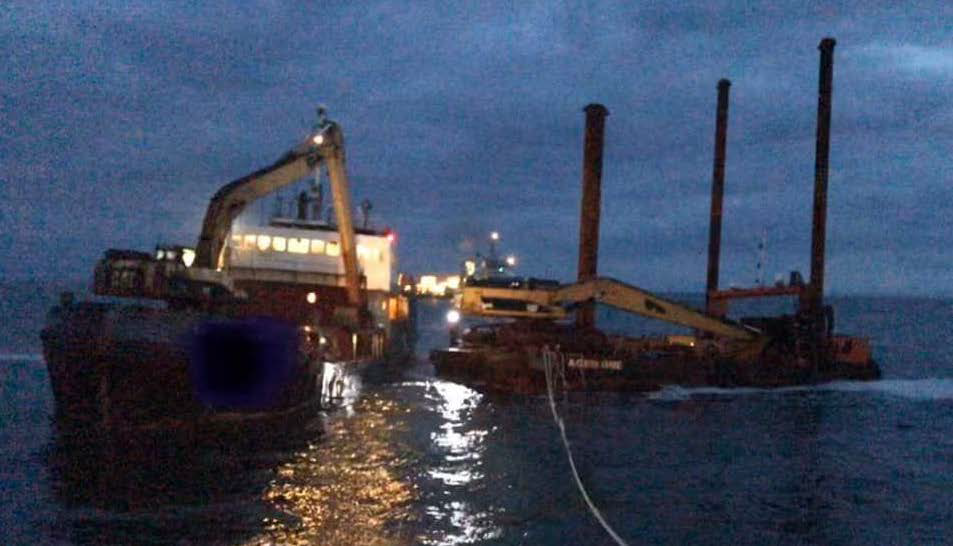 Shearwater with her barge back alongside, April 10, 2020. Damage to Shearwater's hull plating is visible forward on the port side (RNLI / MAIB)

At 0242 the following morning, Ievoli Black arrived and transferred over two more salvage pumps, which were enough to return the dredger to level trim. The RNLI lifeboat retrieved the barge and helped secure it alongside Shearwater in the same towing configuration as before. Over the course of the next 12 hours, the barge made repeated heavy contact with Shearwater's hull, resulting in yet more damage to her hull plating.

At about 1730 hours, the larger towing vessel Forth Drummer arrived and retrieved the barge, bringing it safely into port at Kinlochbervie. The Drummer then came back to get Shearwater and took her in tow to Aberdeen for repair, departing at about 2200 hours on the 10th.

Early the next morning, at 0512, Forth Drummer reported that Shearwater was listing again at an angle of about 10 degrees. The Drummer and Shearwater put into port at Scrabster for temporary repairs, and Shearwater departed for Aberdeen again on April 16, arriving the 18th. 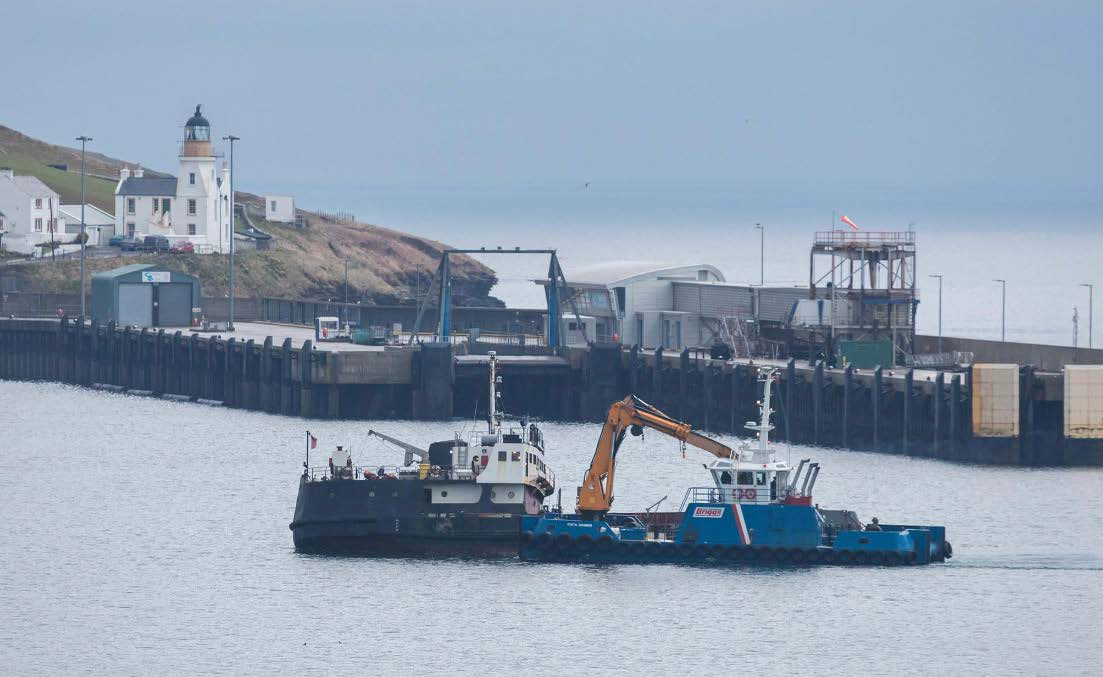 A drydock inspection found that the towline had fouled both shafts, damaging the port shaft and gearbox. The hull plating along the port side was significantly dented, with penetration. As for the barge, it was largely undamaged, and it remained at anchor in Kinlochbervie for the next eight months.

According to MCA, the 1968-built Shearwater was operating with a load line certificate exemption. She had had a long series of run-ins with inspectors, including safety-related deficiencies and detentions. The owner attempted to proceed to sea without a licensed master aboard in 2014, and in 2017, the vessel had left a yard in Southampton in "dangerously unsafe" condition, MCA reported. She was not certified for towing operations; on the casualty voyage, her Croatian master had no prior towing experience and explicitly relied upon the owner's judgement for all towing-related decisions.

"Shearwater’s crew lacked the competence necessary to undertake a towing operation of this nature and the vessel was also unsuitable for the task," MCA concluded. "After a long, tiring day, and in an effort to seek shelter, the unplanned and unsupervised confusion with ad-hoc procedures meant that the fouling of the propellers and subsequent collision were effectively inevitable."

[Correction: An earlier version of this article suggested that Shearwater was flagged with St. Kitts at the time of the casualty. This is not accurate: she was flagged in the UK in April 2020, and St. Kitts accepted her into its registry several months after the casualty, according to her Equasis record. In her first port state control inspection as a foreign-flag vessel, UK inspectors identified 11 deficiencies, including violations related to her fire pumps, firefighting equipment, crew training and Maritime Labor Convention compliance.]