A Maersk-operated containership was brought successfully into port in Australia after the vessel blacked out and spent more than 30 hours drifting south of Sydney. The Australian Maritime Safety Authority (AMSA) reports it coordinated with Maersk and Switzer Australia and that the vessel and crew were never in immediate danger. It is the second incident along Australia’s east coast in months after they rescued a bulker that also lost propulsion in a winter storm.

In the latest incident, AMSA reports that it was notified by the Singapore-flagged Rio Madeira, 80,300 dwt, that the vessel had lost propulsion power before midnight on October 20. The vessel had been sailing from Singapore and was reported to be approximately 38 nautical miles from Narooma on the southeast coast, south of Sydney.

According to the safety authority, the vessel which has a capacity of 5,900 TEU was loaded with 3,380 containers including 126 listed as dangerous goods. The ship was also loaded with 3,075 tons of heavy fuel oil and 236 tons of diesel oil. AMSA said it was closely monitoring the ship and receiving regular reports from the ship's company.

Maersk issued a statement confirming that the vessel suffered an electrical power outage causing a loss of propulsion. They said the crew of 27 however was in no danger and that the boxship had a power supply from the emergency generator. However, it did not have sufficient power to perform all functions which were required to sail the vessel. 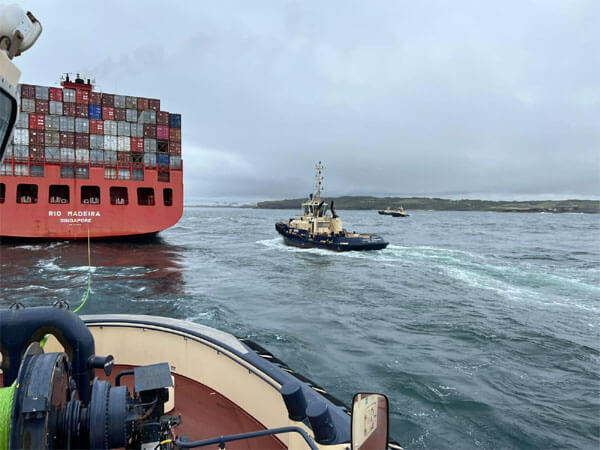 A specialized emergency towing vessel, the ETV Svitzer Glenrock, was dispatched from Newcastle to provide towing assistance to the Rio Madeira. The Svitzer Glenrock arrived at the location of the Rio Madeira at 15:00 AEDT on Saturday, October 22. Prior to a tow connection, the Rio Madeira however reported that technicians had been able to restore electricity onboard the vessel. The boxship was escorted to a berth at Port Botany arriving on the afternoon of October 23 and berthing with the assistance of four port tugs.

Maersk reports that cargo operations were commencing while repairs were also being completed on the ship. The vessel will likely remain in Australia all week delaying its voyage to New Zealand.

In July, the 28,000 dwt bulker Portland Bay lost power during a winter storm off the coast near Sydney. Tugs worked for up to 36 hours to keep the vessel from being pushed onto the rocks and repositioned it into a sheltered area. The bulker was later towed to port to undergo repairs.