Testing was recently completed at the Ivory Coast’s new container terminal which is due to open in November. Built by the Chinese and operated in a partnership between companies owned by Maersk and MSC, the new terminal is seen as a gateway for trade growth in West Africa and part of the going focus on the opportunities in Africa by the major carriers.

The contract for the construction project was awarded to the China Harbour Engineering Company (CHEC) in August 2020, with work beginning two months later on the new terminal, which will be the second container terminal in the port of Abidjan. With an annual capacity of 1.5 million TEU, the first phase of the new terminal was projected to cost more than $400 million to develop. The terminal is operated under a 20-year concession to a joint venture between Bolloré, acquired earlier this year by MSC, and APM Terminals, a division of AP Moller – Maersk.

Côte d’Ivoire Terminal was formed in 2013. The existing container terminal operated by the group was expanded in 2015 from a capacity of 800,000 TEU to 1.5 million. The new facility located adjacent to the existing terminal will again double capacity at the port of Abidjan.

Phase one of the project was handled by the Port Autonome d’Abidjan (PAA) and consisted of the deepening and widening of the Vridi Canal access channel, and the reclamation of more than 45 hectares of land. The reclaimed land was used for the creation of the new second container terminal, and an adjacent RoRo facility. 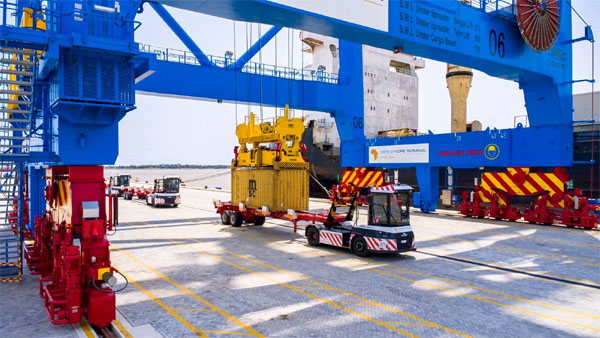 The tests for the new container terminal were conducted between October 12 and 14. The MSC Floriana, a 614-foot long containership with a capacity of 1,879 TEU, performed the first test port call. According to executives at the terminal, the 50-hour exercise allowed for the evaluation of the unloading and loading operations on the ship using the STS gantries. They also tested the handling of the containers at the yard with RTG cranes and Gaussin electric tractors. The evaluation also covered all other systems, including the Terminal Operating System linked to the invoicing and customs systems.

“We are pleased to have been able to successfully complete the various tests of our entire operational structure, in terms of both equipment and the work of our teams,” said Koen de Backker, managing director of Côte d’Ivoire terminal. “This performance means that we are entirely satisfied with the implementation of our operational system, and assures us of our team’s ability to receive and handle every ship that calls at our quay.”

These tests come weeks before the scheduled launch of operations at the new container terminal at the port of Abidjan. The new terminal will be the only terminal on the West African coast capable of handling larger new-generation ships of up to 14,000 TEU and up to approximately 1,150 feet in length.

They predict the terminal will be a transshipment hub. With the latest generation container handling equipment, the executives said it will help reduce the cost of handling cargo and contribute to trade growth in the region. They expect to develop significant transshipment volumes destined for Guinea (Conakry), Sierra Leone (Freetown), and Liberia (Monrovia). 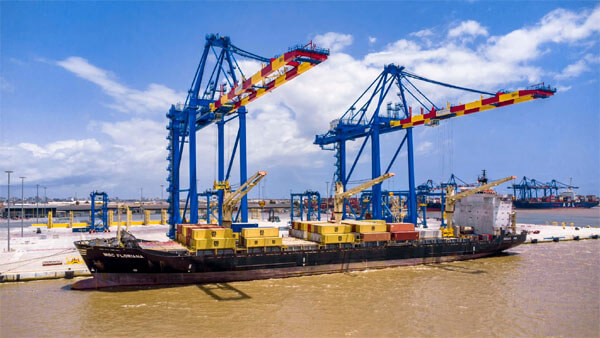