Rescue teams responded to the scene of a horrific accident at the Port of Long Beach on December 9 as one of the container loaders drove over a pickup truck pinning the driver inside. The Long Beach Fire Department’s Urban Search and Rescue Task Force arrived at the terminal to find the stacker on top of a pickup truck.

A woman in her 60s was driving the pickup truck which was labeled "rail crew." She was transported by the Long Beach Fire Department paramedics to an area hospital with injuries to her arms and legs. She was reported to be in stable condition.

It was unclear what the circumstances were of the accident and how the reach stacker, which was not carrying a load at the time, came to be on top of the pickup truck. The vehicle was largely flattened under the weight of the stacker. 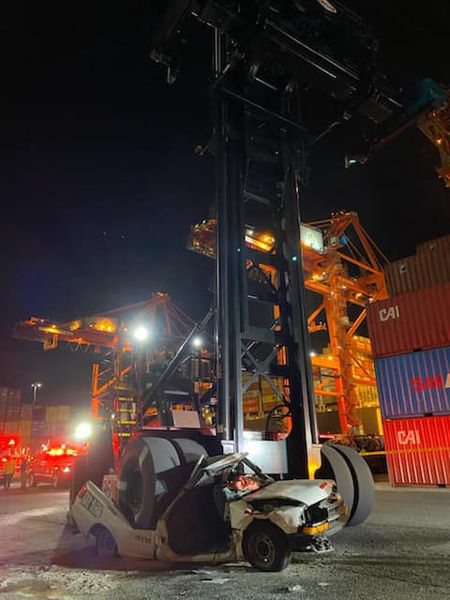 Operations at the port continue at an all-out pace as record volumes continue to flow through the terminals. Earlier in the day yesterday, the Port of Long Beach reported that it had experienced another record month in November. Container volume was up just over 30 percent versus a year ago to 783,523 TEUs.

Driving the strong increase in volume were imports while export volume declined by five percent. Reflecting the strong import volume, the traffic in empties was up by more than half versus a year ago.

“Online shopping and PPE purchases are on the rise as consumers continue the stay-at-home lifestyle, but the overall economic outlook is uncertain with another wave of COVID-19 spreading across the country,” said Mario Cordero, Executive Director of the Port of Long Beach. “We’re dealing with the surge in containers by partnering with stakeholders, utilizing a temporary storage yard, and prioritizing dual transaction truck trips that balance inbound and outbound cargo flows.”

The Port of Long Beach reported 87 container ship calls in November, 17 of which were unscheduled vessels that made up for voyages canceled earlier this year.

For the calendar year, the port’s total is up nearly five percent with the gains primarily coming in the second half of the year on the rebound after the lockdowns in the spring.