LNG-Fueled Bulker Designed to Easily Convert to Ammonia or Methane

A consortium of nine Japanese shipbuilders has completed designs for a new ammonia-ready LNG-fueled Panamax bulk carrier. In developing their design, they said the goal was not only to have a more environmentally-friendly vessel, but also to incorporate elements to permit a quick and less costly migration to future fuels.

The design calls for an 80,400 dwt Panamax bulker that maximizes load capacity. The vessel would measure 750 feet in length with a 105-foot beam and have a service speed of 14.2 knots.

The initial configuration would be for a dual-fuel vessel operating on LNG. As such, they would use currently available technology to reduce emissions while also preparing for the future. The design maps out two future scenarios using the leading candidates being developed as alternative maritime fuels. In one scenario, the vessel would convert to ammonia taking into consideration the safety issues and corrosive nature of the fuel. In the second scenario, the vessel would alternatively convert from LNG to liquified carbon-neutral methane.

“The ship is developed as a flexible and efficient solution to enduring the unpredictable period of fuel transition,” says the Planning and Design Center for Greener Ships (GSC) that developed the design approach.

In addition to providing alternative migration paths, the design seeks to reduce the costs and timeframe that would be required to remodel the vessel to use the future fuels. They aim to minimize the range of modifications by taking into consideration the requirements of the conversion in the design layout of the vessel as well as standardizing equipment. They are seeking to increase the parts that can be used for both LNG and ammonia or methane as well as creating designs for easy replacement of equipment to speed the conversion.

Economic considerations are also incorporated into the design for the efficient operation of the vessel. It would have two sets of 2,500 cbm fuel tanks. The vessel will have the same cruising range as a current heavy fuel Panamax bulker. 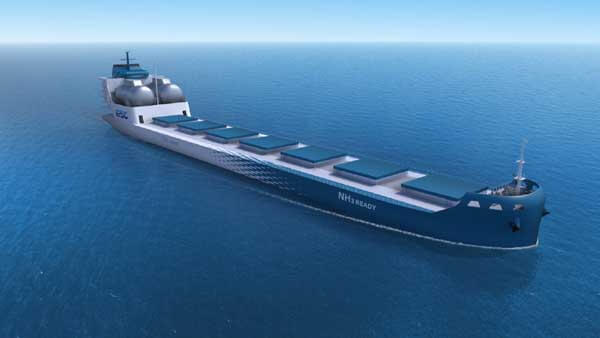 GSC was launched in 2020 uniting nine of Japan’s shipbuilders including Mitsubishi Shipbuilding and ClassNK to focus on the commercialization of next-generation greener ships. The Next Generation Environmental Ship Development Center reports that it will continue to contribute to the development of the Japanese maritime industry through the planning and development of new vessels aimed at zero emissions for international shipping.