Letter: Whale Meat is Not an Icelandic Tradition

A group of environmental organizations in Iceland have sent an open letter to their Parliament protesting the Government's decision to allow whale hunting until at least 2023.

“With the success of whale watching in Iceland it is clear that a whale alive is worth more than a dead whale, especially when whale meat is not an Icelandic tradition, but one acquired from Norwegians a few decades ago,” states the letter. “Polls have shown that less than one percent of Icelanders eat whale meat on a regular basis and 81 percent said they had never eaten it.”

Julie Lasserre, one of the founders of Reykjavik Whale Save, Vice-President of Sea Shepherd Iceland and the marine biologist quoted in the letter, said media coverage of their protest in Iceland has been limited despite the ecological importance of whales.

“During the past decade scientists have been showing the importance of whales in marine ecosystems and their role against climate change. The "Whale Pump" concept explains that more whales means more phytoplankton, then more zooplankton and finally more fish. Whales are not only increasing the primary production of the oceans they also increase carbon storage which mitigates climate change.

“By continuing whaling the Icelandic government is going against its own climate action plan that aims to increase carbon sequestration. We are asking the government to cancel its decision to renew the whaling permit for five years, a decision made by one minister, Kristjáns Þórs Júlíusson.” Whales are hunted by just one company in Iceland, Hvalur hf.

Lasserre says that a poll conducted in 2018 showed that around 17 percent of Icelanders were strongly opposed to whaling, around 17 percent were strongly pro-whaling and that about 30 percent had no opinion. “We hope and think that the amount of Icelanders who are anti-whaling has increased especially with the increasing interest of people for environmental issues,” she said. 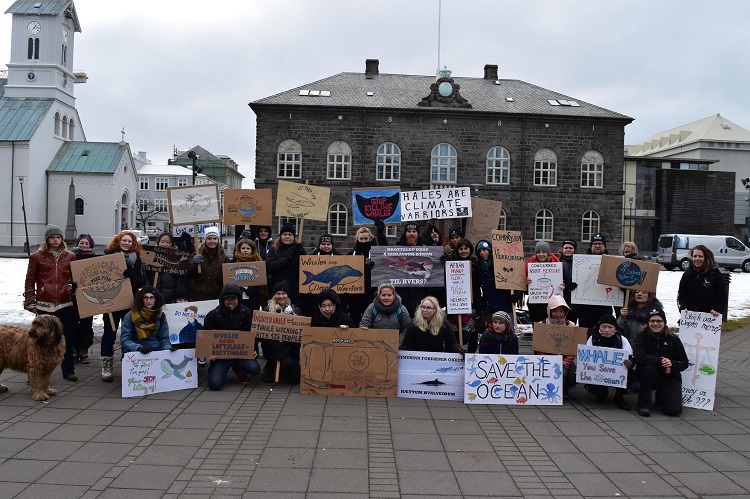 Excerpt from the letter:

Dear member of Parliament in Iceland.

We are contacting you on behalf of several organizations that are concerned about nature and animal preservation. We would like to express our great concern about the decision made by Kristján Þór Júlíusson, Minister of Fisheries and Agriculture to renew the whaling permit for Fin whales and Minke whales until 2023.

Concerning such a controversial topic, we do not understand how this decision could have been taken by what it seems only one minister and based on a report so criticized by professionals, scientists and public opinion. On January 22nd, a group of scientific experts from the Ecological Society of Iceland posted an article to correct the report on the macroeconomic impact of whaling published by the Department of Economics at the University of Iceland, and expressed their opinion that the report was highly biased. They reminded at the same time the roles of whales within the marine ecosystems, as more and more research has been showing in the world. For instance, by diving, migrating, producing large faecal plumes and by dying in the oceans whales are improving primary production and carbon storage. Therefore, they are highly contributing to the fight against climate change.

Climate change is today the biggest threat to the planet and to humanity. For weeks now students have been striking for the climate to ask governments to take immediate action. How is it possible to deliver at the same time a hunting permit against species that help mitigating climate change?

Moreover, Iceland, having signed the Paris Agreement, launched a Climate Action Plan last year that not only fails to include whales but more importantly fails to include marine conservation in general. In January, some of our members attended the seminar “Defending our oceans against the climate threat” at Grand Hotel and again neither whales nor carbon sequestration by oceans (called Blue carbon) were mentioned. We asked the representatives present why those topics were ignored and they replied that they were not aware of them. One of our members, Julie Lasserre, who is a marine biologist sent an email afterwards to the Government to provide scientific references but no one has replied.

On the other hand, we are glad to see that whale watching companies have been working with the City Council of Reykjavik to create and even extend the whale sanctuary. But we do not understand how it is possible for Iceland to protect whales in one area promoting the observation of them alive in the wild, in their natural habitat, and at the same time to kill them in nearby areas? With the success of whale watching in Iceland it is clear that a whale alive is worth more than a dead whale, especially when whale meat is not an Icelandic tradition, but one acquired from Norwegians a few decades ago. Polls have shown that less than 1% of Icelanders eat whale meat on a regular basis and 81% said they had never eaten it. (Source: Gallup 2017) It is not even possible to argue for whale meat consumption for its health benefits since it is highly concentrated in heavy metals and therefore even more difficult to sell abroad.