Kenya’s ambitions of becoming a regional shipbuilding and repair hub have received a major boost following the floatation of the first large ship to be fully constructed on the Kenyan side of Lake Victoria in decades.

President Uhuru Kenyatta, who has been overseeing the revival of Kenya’s maritime transport and logistics sector in order to position the East Africa nation as a shipping hub, witness the floatation of the new 1,800 tonne MV Uhuru II wagon ferry at the Kisumu Pier after he officially inaugurated the Kenya Shipyards Limited’s (KSL) Kisumu Shipyard.

The $20 million MV Uhuru II is the first ship built locally by KSL, which is working with Dutch partner Damen Shipyards. The ferry, which is nearing completion, is expected to be commissioned later this year.

Small passenger-only commuter ferries have also been built on Lake Victoria's Kenyan shores in recent decades, but Uhuru II is a Kenyan newbuild on a new scale: she is a steel-hulled railcar carrier of about 1,800 dwt. Uhuru II may be the "first ship to be made in Kenya by Kenyans," according to the nation's ministry of defense.

Damen, the Dutch-based international shipyard group, has been assisting KSL with consultancy services on ship construction as well as offering the technical expertise required in the construction of the ferry.

He added that the key sub-sectors of the blue economy, which include maritime transport and logistics, fisheries, as well as shipbuilding and repair, represent low-hanging fruits that must be exploited.

The successful assembly of the ferry at Kisumu Shipyard saved Kenyan taxpayer $10.8 million on imports with its deployment,  increasing Kisumu port's haulage capacity to over 3,060 tonnes. It will complement the 1966-built 1,260-tonne MV Uhuru 1, which is currently ferrying goods - mainly petroleum products - to neighboring Uganda.

MV Uhuru II will be used to ferry petroleum and petroleum products and other goods to neighboring countries in Lake Victoria, and it forms part of a wider plan by Kenya to build a multimodal transport system to serve the east Africa region. The plan also involves the revival of the Kisumu port in Lake Victoria thus creating a multimodal system involving road, rail and water.

The floatation of the ferry came just a day after President Kenyatta, who is set to leave office after the general elections slated for August 9, commissioned the Kisumu railway station and expressed optimism that the rail transport will boost the lakeside city’s status as an economic hub, connecting not only Tanzania and Uganda but also other countries like Rwanda, Burundi, South Sudan and the Democratic Republic of Congo. 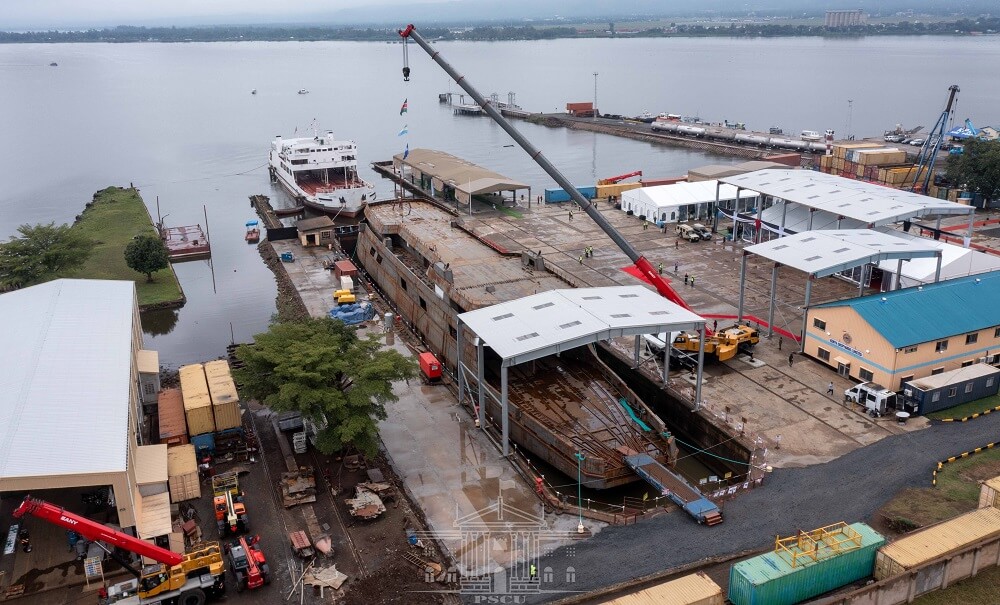 The inauguration of the Kisumu shipyard, a facility that will repair, refurbish and rehabilitate ships for use in Lake Victoria, now means that Kenya has two shipyards giving the country the required facilities to compete for the lucrative shipbuilding and repair business in the region.

Kenya believes that together with the Mombasa shipyard (which was opened in December last year), the country will also be able to save substantially in terms of the foreign exchange that goes into maintaining its ships in foreign shipyards. The shipyards are under the management of KSL, a military-run agency that has already secured six orders for the construction of ships from Tanzania and Uganda with another 11 orders from local firms.

With the two shipyards, Kenya joins the leagues of South Africa and Egypt, which have managed to build vibrant local shipbuilding industries.