Strict new regulations have been enacted starting today on the movement of personnel and seafarers in and out of the Port of Kaohsiung, Taiwan after a new cluster of COVID-19 was discovered in the port over the weekend. The new restrictions were enacted after one of the port’s pilots tested positive for the virus and it was discovered that he had been skipping regularly scheduled screenings.

All the pilots working at the Port of Kaohsiung were ordered to undergo mandatory testing as well as the communities around the port on Monday. Officials reported that the pilot tested positive on February 5 but had skipped at least two prior screenings. Under increased restrictions placed on the port as a result of the spread of the Omicron variant, pilots and other port personnel were required to be screened every three days.

In addition to the pilot, 10 new domestic cases of COVID-19 were identified with four cases within an individual family. Officials are working to trace the individuals and establish any contacts with the port. In addition, 174 people who had come in contact with the cases have been ordered into quarantine, including six members of the pilot’s family who so far have tested negative for the virus.

A total of 41 harbor pilots were re-screened on Sunday and Monday. At last report, health officials had cleared 29 of the pilots with negative tests and were awaiting the results for the remainder of the pilots. So far, port operations have continued normally at Kaohsiung, but the government reported that it plans to fine the pilot who skipped his two screenings up to a maximum of more than $10,000.

An additional 15,600 people were also screened in the port area as of yesterday. Starting today, February 9, port officials will not permit anyone who has not been screened to enter or work in the port area.

This latest outbreak comes after Taiwan strengthened controls and emphasized the port area’s pandemic prevention actions. In addition to the mandatory regular screening requirement, clearing stations for the boarding and disembarking of personnel were set up in the port and operating 24 hours a day. Everyone was required to wear protective equipment and had to be escorted to and from their ships. Ships were not permitted to lower their gangways without permission and can be fined up to $3,500 if the restrictions on the gangway were not followed. Port officials were also conducting twice daily checks to make sure that the pandemic prevention regulations were being followed. 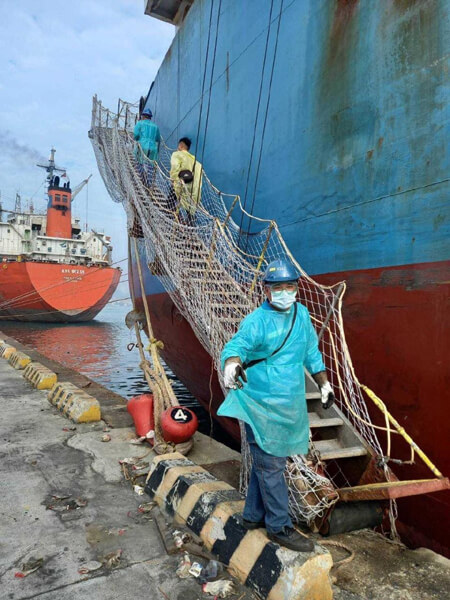