The Italian Navy is assisting the South Korean product tanker B. Ocean that was robbed and left disabled by pirates last week in the Gulf of Guinea. After attempting to proceed under its own power to Abidjan in Cote d'Ivoire it was determined that the tanker requires assistance and is not expected to reach port till mid-week.

The Italian patrol vessel Comandante Borsini was dispatched to assist the product tanker, which had been boarded on November 23. The pirates left the vessel the following day and the captain of the tanker reported the incident to the shipping company in South Korea. Security forces had reported losing communication with the tanker last Wednesday and requested the assistance of vessels operating in the area to report sightings or any unusual activity in the area.

The corvette reports that when they reached the tanker it was adrift about 300 miles from the coast, due to technical problems with its engines. A security team from the San Marco Marina Brigade was placed on board the tanker by helicopter to check the situation. They are confirming that the 19 crew members were safe but that the pirates had robbed them of money and valuables. The pirates also for the second time this year stole a portion of the fuel cargo from the B. Ocean. In January 2022, it was reported that they stole 977 tons of fuel in a similar incident. 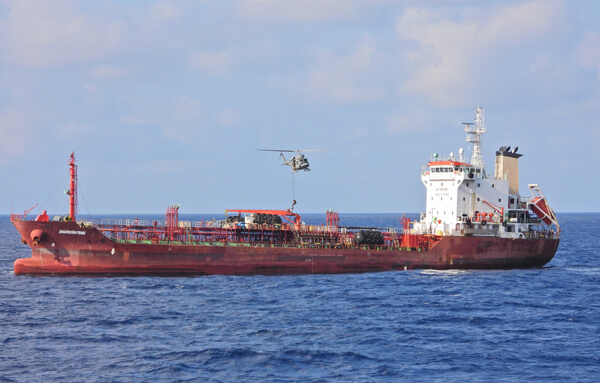 A technical team from the Borsini boarded the tanker and was working to assist to restore the propulsion. The Italian Navy reports that the pirates had tampered with the navigation and communication systems. They also caused extensive damage to the engine.

Initial reports indicated that the B. Ocean was expected to reach Abidjan on Sunday, November 27. A spokesperson for the South Korean Foreign Ministry however is reporting that the tanker is requiring a tow to port. The Italian Navy is confirming the request for deep-sea tugs to transfer the tanker to Abidjan. The B. Ocean is now expected to reach port on Wednesday, November 30.

The Italian Navy has been assisting in the region since 2019 with project Gabinia, a national operation to contribute to maritime security in the Gulf of Guinea. In April 2022, another Italian frigate assisted a bulk carrier that had been threatened in the area. In 2020, the Italian Navy sent a helicopter to another tanker that had been boarded off Benin and helped in getting the pirates to leave the tanker unharmed.