Ireland Downgraded in the Trafficking In Persons Report

Ireland has been downgraded by the U.S. State Department's Trafficking In Persons Report from a Tier One country to Tier Two, putting it on a par with many other countries, including India and Indonesia.

The report criticizes Ireland's failure to protect vulnerable people, including children, from exposure to sexual exploitation and forced labor and singles out the fishing industry for special mention. It cites criticism for the government’s immigration scheme for making crewmembers of Irish fishing fleets vulnerable to forced labor by linking sponsorship to a single employer and by limiting registration of existing workers to those who came forward within three months of the commencement date of the scheme. A parliamentary committee published a report recommending changes, including a moratorium on issuing permits to out-of-country non-EEA foreign nationals until the permit could be decoupled from a single employer and until the position of all in-country non-EEA nationals could be regularized. The committee also recommended a single department be given overall responsibility for the fishing industry.

Advice given to Ireland in the report calls for Ireland to vigorously investigate, prosecute, and convict suspected offenders of both sex and labor trafficking using the trafficking law; train law enforcement and prosecutors on developing cases without reliance on victim testimony; train law enforcement, judges, and prosecutors on a victim-centered approach; increase efforts to identify and protect all victims and establish a national hotline to report trafficking crimes.

Commenting on the report, Ken Fleming, ITF co-ordinator for Ireland and Britain, said: "This confirms our own findings and those of the Joint Oireachtas Committee on Business, Enterprise and Innovation on the scale of the problem in the Irish fishing industry. It is heartening that a completely independent international body has validated our own findings by its' decision to downgrade Ireland's ranking in this vitally important sector where human rights are under constant attack by unscrupulous and unconscionably greedy employers.

"The continuing failure of the Irish state to effectively enforce its own laws or heed warnings by organizations such as the ITF and the Joint Oireachtas Committee has left us with no option but to initiate proceedings against the government in the High Court, which are due to be heard in the near future."

The report highlights many countries where human trafficking in the fishing industry is evident. 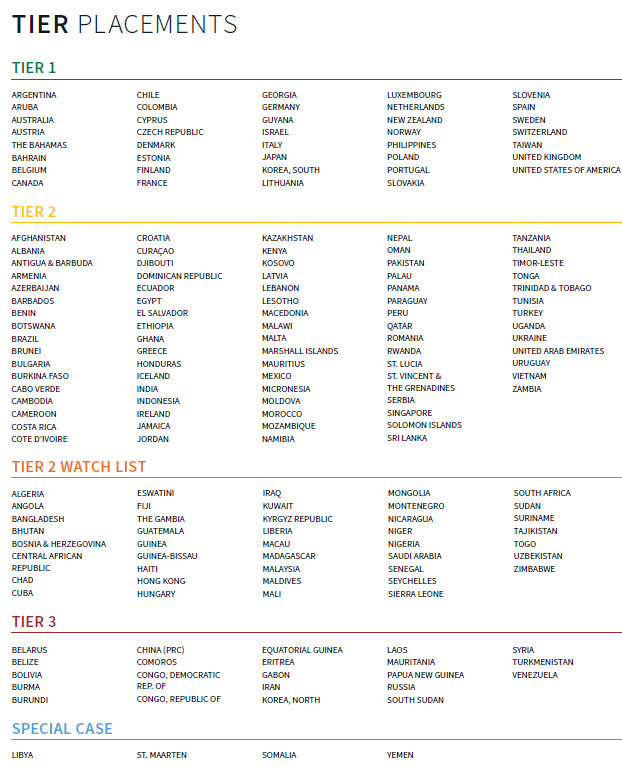