On Sunday, the UN Intergovernmental Panel on Climate Change (IPCC) released a new estimate of the likely effects of anthropogenic carbon emissions in the medium term, with unpleasant conclusions. The panel reached a consensus estimate that global warming is likely to reach the Paris Climate Accord limit of 1.5 degrees Celcius between 2030 and 2050, with an additional increase to 2.0 degrees C thereafter, even if parties to the Accord fulfill their commitments to reduce emissions. The marginal increase from 1.5 degrees of warming to 2.0 degrees of warming is likely to result in considerably more damage to the human environment and food supply.

“Every extra bit of warming matters, especially since warming of 1.5ºC or higher increases the risk associated with long-lasting or irreversible changes, such as the loss of some ecosystems,” said Hans-Otto Pörtner, co-chair of one of the working groups behind the report.

Risks related to habitat loss, extinction, and the spread of non-native (invasive) species grow quickly with an additional increase of 0.5 degrees C. On land, high-latitude environments like tundra are most at risk of change; in the sea, low latitude areas will experience the most damage, and coral reefs are expected to disappear altogether under a 2.0 degrees C warming scenario. The risk of damage to valuable fisheries may rise quickly with an additional increase from 1.5 to 2.0 degrees C of warming.

Habitat risks for human populations also increase with an increase from 1.5 degrees warming to 2.0 degrees, including: additional loss of shoreside habitat from sea level rise; increased heat-related morbidity and mortality, especially in urban areas; and the spread of tropical diseases like malaria and dengue fever to previously unaffected regions. The damage to production of staple crops in developing regions in the tropics and sub-tropics (sub-Saharan Africa, Southeast Asia, Central and South America) is also likely to increase with each additional increment of warming. A rise of 2 degrees C would likely result in a "disproportionately rapid evacuation" of the tropics, with implications for the rate of irregular migration.

The range of expected sea level rise is about one to two feet by the century's end assuming warming of 1.5 degrees C, and slightly higher at 2.0 degrees C, with the worst effects for small islands and low-lying coastal areas. The effects of CO2-driven warming will continue to be felt for centuries, with sea level rise continuing "well beyond 2100." 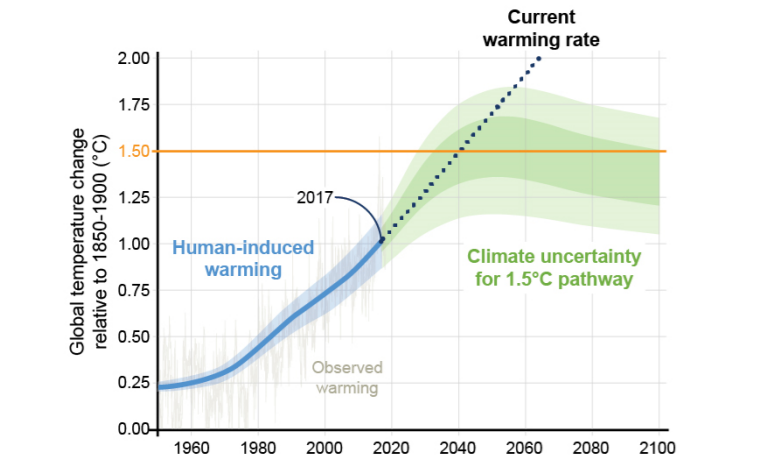 Total damage to the human economy at 1.5 degrees C of warming is estimated at about $55 trillion, and damage at 2.0 degrees C of warming at $70 trillion. Even if spread out over decadal periods, this represents a significant percentage of economic activity: gross world product (the total of all national GDP values) is an estimated $87 trillion this year.

While the economic risks are significant, the report concludes that the action required to avoid 1.5 degrees of warming is beyond the bounds of likely, politically acceptable solutions. All nations would have to implement "rapid and far-reaching" changes in order to reduce emissions by about 45 percent by 2030, then by 100 percent by 2050. The latter "net zero" goal would require removing CO2 from the air to offset continued carbon output.

To achieve this aim, the study suggests the need to eliminate coal-fired power plants and impose carbon pricing from $135-$5,500 per ton by 2030, rising to $690-$27,000 per ton by 2100 - costs which suggest economic disruption and sacrifice. The average American emits roughly 16 tons per year, which would imply a tax burden of at least $2,000-$11,000 per person for those who continue to emit at current levels.

Ninety-one authors and review editors from 40 countries prepared the IPCC report, with additional input from 42,000 expert and government review comments. “With more than 6,000 scientific references cited and the dedicated contribution of thousands of expert and government reviewers worldwide, this important report testifies to the breadth and policy relevance of the IPCC,” said Hoesung Lee, Chair of the IPCC.

The United States joined nearly 180 nations in accepting the report but did not endorse its conclusions, citing its decision to withdraw from the Paris Climate Accord.