A maritime investment company that is helping to launch a Ritz-Carlton brand cruise operation announced plans to expand through the purchase of niche cruise operator Sea Cloud Cruises. The Yacht Portfolio, an investment group headed by Douglas Prothero, has entered into a letter of intent to acquire Sea Cloud Cruises of Hamburg, Germany suggesting that it could use the brand to expand its relationship with hotel and lodging giant Marriott International.

Sea Cloud is a unique niche operation in the cruise industry running one of the world’s most famous sailing vessels as well as two newer sail cruise ships. Started in 1979, the company markets cruises and charters of the 64-passenger sailing yacht the Sea Cloud. Launched in 1931 as the Hussar V, the three-masted barque was built in Kiel, Germany for U.S. heiress and businesswoman Marjorie Merriweather Post and her then-husband Wall Street tycoon E.H. Hutton. The vessel sailed as a private yacht before and after World War II and saw service for the U.S. Coast Guard and U.S. Navy during the war. The 359-foot vessel became a commercial cruise ship in the late 1970s being joined by the Sea Cloud II in 2001 and last year, the newly built Sea Cloud Spirit.

"Sea Cloud offers such a unique, environmentally-friendly experience in the cruise space, which aligns well with our continued focus on building a strong portfolio of niche luxury brands," said Douglas Prothero, CEO of The Yacht Portfolio. "We look forward to completing a transaction with the Sea Cloud team and supporting the brand's next phase of growth in the luxury cruise space."

In announcing its agreement to purchase the German cruise line, the investment group said that the acquisition not only expands The Yacht Portfolio's presence in the luxury cruise sector but also “creates an opportunity to expand its relationship with Marriott International beyond The Ritz-Carlton Yacht Collection.” They suggested that the transaction allows Marriott International to enter the cruise industry through its other luxury brands.

"We are excited about the transaction between The Yacht Portfolio and Sea Cloud and look forward to the opportunity to collaborate further with The Yacht Portfolio to bring our luxury accommodations to sea," said Timothy Grisius, Global M&A and Real Estate Officer at Marriott International. 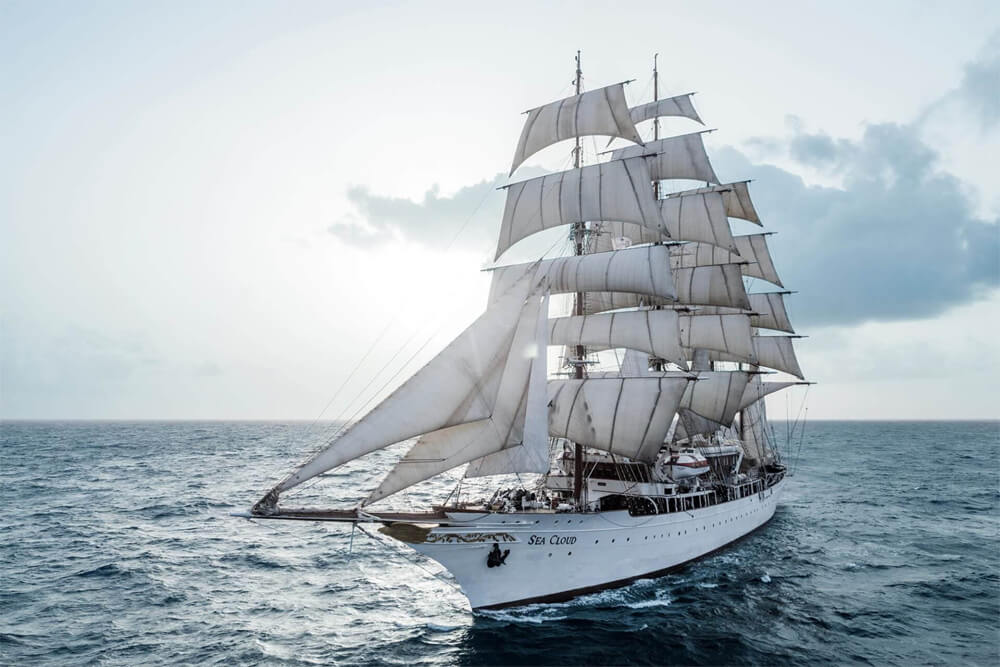 Douglas Prothero partnered with Oaktree Capital and in 2017 announced plans to launch the new ultra-luxury The Ritz-Carlton Yacht Collection. The plan was to build three 298-passenger luxury yacht-style cruise ships that would be 623 feet in length and 21,000 gross tons. They had said they would begin cruises late in 2019 but the start-up has been plagued with problems at the shipyard in Spain and then with the pandemic. After five delayed start dates, the first yacht named Evrima completed harbor trials and a drydocking last fall and is now scheduled to enter service in May 2022. The group has the rights to use the Ritz-Carlton brand name and is working with the Marriott-owned brand to develop the operation and marketing, but neither Marriott nor Ritz-Carlton is an investor in the operation.

Prothero said that with the planned acquisition, The Yacht Portfolio is also sending a clear signal for continuity for Sea Cloud. In addition to the continuation of the successful business model, the headquarters of Sea Cloud Cruises will remain in Hamburg, Germany, and the experienced team of employees will continue with the company as part of the transaction. They said that the operations would be managed as before to ensure that the employees' relationships with customers and business partners will also be maintained and that the existing voyage planning and charter commitments are intended to be continued.