A burgeoning demand for the Internet of Things (IoT) is propelling exponential growth in the trade of electronic components.

Demand for electronic components used in IoT devices drove the value of trade in international imports of information and communications technology (ICT) goods to $2.1 trillion in 2017, according to new figures released by UNCTAD. It is the first time that global ICT goods imports have rebounded since 2014, showing six percent annual growth. 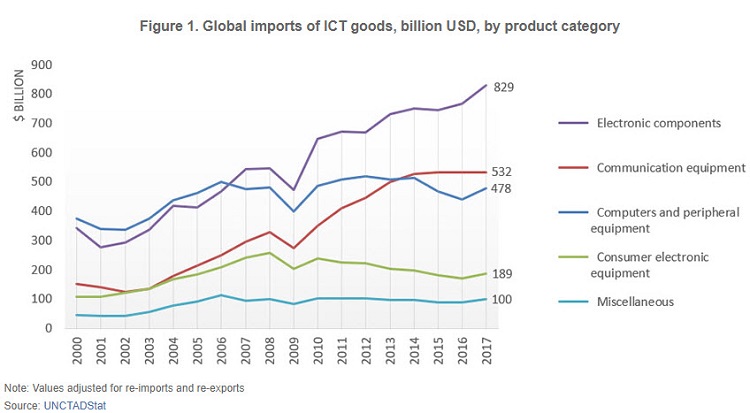 Trade in ICT goods grew slightly faster than merchandise trade and represented 13.4 percent of the total in 2017, down from the 16.1 percent high during the dot-com boom in 2000 but the highest in two years. By comparison, in 2017 machinery and transport equipment accounted for 37 percent and food for eight percent of merchandise imports.

Among ICT products, trade in electronic components continued to expand with an annual growth rate of eight percent – just below that of computers and consumer electronics (nine percent).

The share of intra-industry trade remains high in this sector, with interdependence between the big Asian, North American and European players, and the top importers typically also feature among the top exporters of ICT goods. 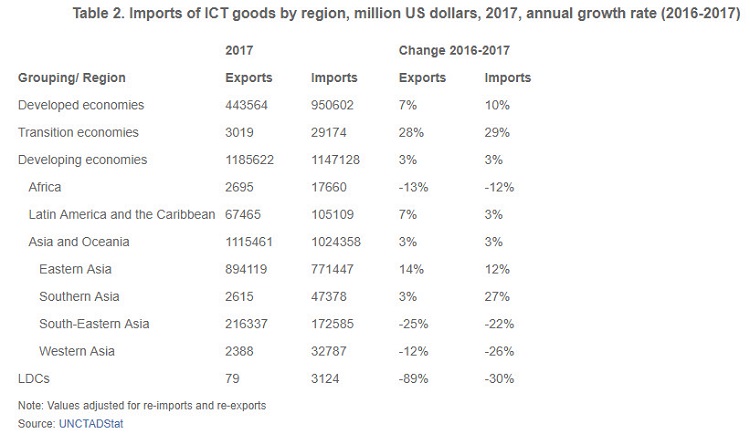 The U.S. was the top importer followed closely by China and Hong Kong. Mexico was the only economy among the top 10 where ICT goods imports did not grow in 2017.

However, at 54 percent market share, developing economies import more than developed economies, because they have a more significant role in assembling ICT goods and so import significantly more electronic components.