June 8 is World Ocean Day and governments and NGOs around the world are working on projects to benefit ocean ecosystems:

Australia's national research organization CSIRO is undertaking the world's largest marine pollution survey, working with countries across the globe to help them assess and reduce the amount of litter entering the oceans.

Some of the world's top 20 polluters will take part in the project including China, Bangladesh, Indonesia, Vietnam and the U.S., plus other countries including Australia, South Korea and Taiwan.

CSIRO senior scientist Dr Denise Hardesty said the project would provide hard numbers on the amount of litter entering the ocean by using real data collected on coastlines and cities across the globe.

"Up until now we've been relying on estimates from World Bank data, so this will be the first time anyone has brought together a group of countries to look at exactly how much litter is entering the oceans," she said.

The project is a collaboration between CSIRO, Schmidt Marine Technology Partners and the Oak Family Foundation.

The story of how global partnerships, governments, industry, academia and other stakeholders came together to tackle the problem of invasive species transmission via ballast water is told in a new IMO publication, The GloBallast Story, launched on June 6 during a side event at the U.N. Ocean Conference in New York.

The publication outlines the key achievements of the GloBallast Partnerships Programme, executed by IMO in collaboration with the Global Environment Facility and the United Nations Development Programme. The project was launched in 2007 after an initial four-year phase and has been assisting developing countries to reduce the transfer of harmful aquatic organisms and pathogens in ships’ ballast water and implement the IMO Ballast Water Management Convention.

The 10 most invasive species that can be transferred through ships’ ballast water are profiled in the publication, which also provides infographics, diagrams and detailed case histories.

Indonesia has become the first nation ever to publish Vessel Monitoring System (VMS) data revealing the location and activity of its commercial fishing fleet. The new data being made public on the Global Fishing Watch public mapping platform reveals commercial fishing in Indonesian waters and areas of the Indian Ocean where it had previously been invisible to the public and other nations.

Susi Pudjiastuti, the Minister of Fisheries and Marine Affairs urges other nations to do the same. “Illegal fishing is an international problem, and countering it requires cross border cooperation between countries.”

At the U.N. Ocean’s Conference this week, Global Fishing Watch committed to host any country’s VMS data, and Peru indicated its intent to be involved.

SkyTruth is a founding partner of Global Fishing Watch along with Oceana and Google. Global Fishing Watch uses publicly broadcast Automatic Identification System (AIS) signals from ships at sea to reveal the activity of the majority of all industrial-sized commercial fishing vessels (those exceeding a capacity of 100 Gross Tons which average around 24 meters). The inclusion of government-owned VMS data adds detailed information on smaller commercial fishing vessels that are not required to carry AIS, and are therefore not reliably trackable by any other means.

Gains in transparency through the sharing of government VMS data is expected to curb illegal fishing and to benefit the fishing industry as public demand for information about the source of their seafood increases.

In addition to committing to support any nation willing to share its VMS data publicly, Global Fishing Watch joined 50 members of the tuna industry and 17 other civil society organization to endorse the World Economic Forum Tuna Traceability 2020 Declaration made at the U.N. Oceans Conference.

The Best Practice Framework (BPF) for the Management of Fishing Gear, developed by the Global Ghost Gear Initiative (GGGI), was launched on June 6 at the SeaWeb Seafood Summit in Seattle.

The framework is the first in the world to recommend practical solutions and approaches to combat ghost fishing across the entire seafood supply chain, from gear manufacturers to port operators to seafood companies.

More than 40 organizations from across the seafood industry, NGOs, and fishing communities have responded during an ongoing 10-week consultation process and helped shape the final document.

“The framework recommends practical, detailed approaches to combat ghost gear, each with an accompanying case study on how changes have been achieved in practice. These include net recycling programs, derelict gear removal initiatives, and fishing management policy adjustments, among others.”

Ghost gear refers to fishing equipment which has been abandoned, lost or otherwise discarded that is now causing harm to fisheries and ocean ecosystems. Each year, an estimated 640,000 tons of such fishing gear is lost or abandoned in the world’s oceans, estuaries and bays. Whether intentionally discarded or accidentally lost, this gear persists for hundreds of years and entangles marine wildlife, adds to ocean waste and causes significant financial loss for fishers and marine communities. 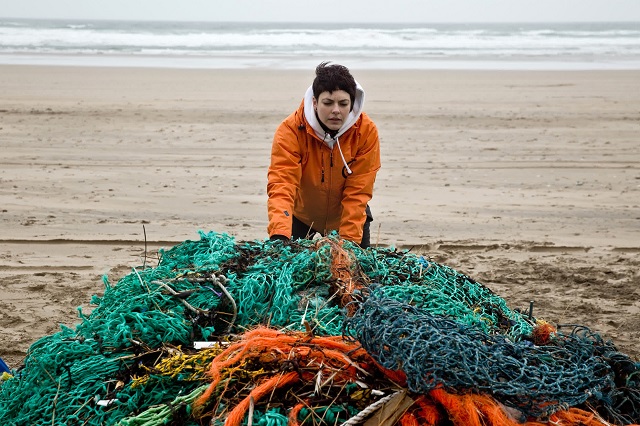 The U.S. 7th Fleet command ship USS Blue Ridge pulled into Okinawa on May 24 for a "safe haven" liberty, the ship’s first port call in more than 70 days. 7th Fleet has set up a series of careful controls to reduce the risk of bringing COVID-19 on board, reflecting previous problems with coronavirus outbreaks in the Navy.  While on liberty, Blue Ridge's sailors will have limited access to designated areas on the pier and a neighboring beach. This controlled...