The World Shipping Council is out with its updated report on the loss of containers at sea.  While seeking to put the recent headline-grabbing losses in perspective, the industry group however also recognizes the safety concerns highlighting new efforts to identify and correct issues.

“From a liner shipping industry perspective, every container overboard is one too many, and every day carriers work with the other parties in the supply chain to enhance safety,” writes the industry group releasing its 2022 update to the parodic survey of carriers. The group has conducted the previous surveys in 2011, 2014, 2017, and 2020. Respondents represent about 80 percent of the total global vessel container capacity deployed at the time of the survey. Individual companies, of course, report losses ranging from none or just a few to catastrophic losses such as the 1,800 boxes on the One Apus late in 2020 and the 750 boxes from the Maersk Essen early in 2021.

“The industry is very concerned about this development,” says the WSC reporting the dramatic losses in 2020-2021. “When we see numbers going the wrong way, we need to make every effort to find out why and further increase safety. The liner shipping industry’s goal remains to keep the loss of containers as close to zero as possible,” says John Butler, President & CEO of WSC.

The industry is undertaking a three-year study looking at the causes to enhance container safety. Initial results have already identified that parametric rolling in following seas is especially hazardous for container vessels. They report that “this phenomenon that is not well known and can develop unexpectedly with severe consequences.” To help in preventing further incidents a notice to mariners has been developed, describing how container vessel crew and operational staff can plan, recognize and act to prevent parametric rolling in following seas. The project will also explore more topics, tests, and measurements to further identify the causes and how they can be addressed. 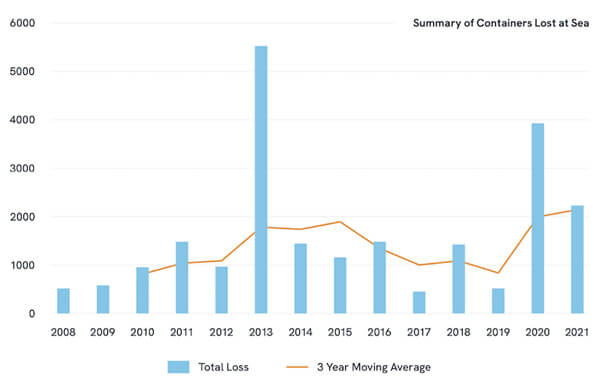 The research is part of the effort to address what the WSC calls “a worrying break in the downward trend for losses,” over the past two years. The average number of containers lost at sea per year since the start of the survey increasing by 18 percent to 1,629, acknowledges the WSC. They further acknowledge that the winter of 2020-21 saw an unusually high number of weather-related incidents, driving the average losses for the two years 2020-2021 to 3,113 compared to 779 in the previous period.

They seek to place the dramatic increase in losses into perspective both by highlighting the overall size of the industry as well as the distortion created to the averages by one-off catastrophic losses during the periods. They point out that there were 6,300 ships moving cargo around the globe calculating that approximately 241 million containers are moved annually. As such, they point out that even with the increase in 2020-2021, the losses amounted to less than one-thousandth of one percent.

Looking at the overall 14-year period since they started surveying carriers, they point out that the average loss across the timespan is the lower 1,629 figure and remains more stable except for the years with significant individual events. As such from 2008 to 2010 total losses averaged 675 containers per year. The report does not address the size of containerships and the increase in capacity but shows that from 2017 to 2019 when there again were no significant vessel causalities the average was 779 per year. However, from 2011 to 2013 with the loss of 4,293 boxes aboard the MOL Comfort and approximately 900 containers lost with the Rena, the average was skewed to nearly 2,700 boxes per year.

They point to severe weather and rough seas as one of the leading causes but also say that rare events such as groundings, structural failures, and collisions can result in containers being lost at sea. In addition to broad efforts involving everyone from ports to stevedores, shippers, and the crews on the vessels, they point to initiatives such as the recently approved revisions of the IMO’s guidelines for inspection programs. They are also seeking to address issues such as a discrepancy in container stacking strength while also calling for mandatory reporting for all containers lost at sea.

The WSC says it will continue to explore and implement measures to reverse the recent upward trends in losses while also welcoming continued cooperation from governments and other stakeholders to accomplish this goal. The complete report is available online.