Indonesia, one of the last strongholds of the critically endangered Sunda Pangolin, has lost up to 10,000 pangolins a year to illegal trade despite significant enforcement success, finds a new TRAFFIC study.

In Scaly Nexus: Mapping Indonesian pangolin seizures, TRAFFIC researchers found an equivalent of 35,632 pangolins had been seized in 111 enforcement cases over the six-year period from 2010 to 2015. Further, massive seizures have occurred since then, with at least 21 seizures in Indonesia since 2016, including a 2.5 ton seizure of pangolin meat in October 2016.

The volume of pangolins and parts seized annually ranged from an equivalent of 2,436 to 10,857 pangolins per year. Data showed that Indonesia functioned mainly as a source country for pangolins, with domestic seizures accounting for 83 percent of the 111 cases studied. Authorities also identified or arrested over 120 suspects linked to those cases.

Sumatra was found to be a hotspot for the trade, with the island topping the list of places recording the most seizures. This island also served as a key link in the illegal pangolin trade between Indonesia, Malaysia and Singapore, with the city of Medan in North Sumatra appearing to act as a major collection site before export.

China and Vietnam were also implicated as destination countries, while Malaysia was reported to be the most prominent transit country in the movement of pangolins from Indonesia. There were 11 recorded seizures (involving 1,046 animals) in Malaysia, all of which were seized on vessels by the marine police with the source of pangolin shipments reportedly from Indonesia. The seizures in Malaysia took place in three main States (Johor, Melaka and Perak) on the west coast of Peninsular Malaysia and generally involved shipments of live pangolins (ranging between 15 and 100 pangolins in each shipment) by sea.

The largest of the Indonesian seizures in terms of number of pangolins seized was one of 5.9 tons of pangolin meat and 790 kg of scales (amounting to an estimated 3,474 whole pangolins) at the Belawan International Container Terminal in Medan, Sumatra, which was reportedly headed for Vietnam. These were smuggled among several tons of snakehead fish and Asiatic Softshell Turtle meat. In terms of weight, the heaviest seizure was of a container with over 8,500kg of dead pangolins and close to 350kg of pangolin scales (which was estimated to amount to 2,812 whole pangolins), which occurred at the Tanjung Priok Port, Jakarta (Java). 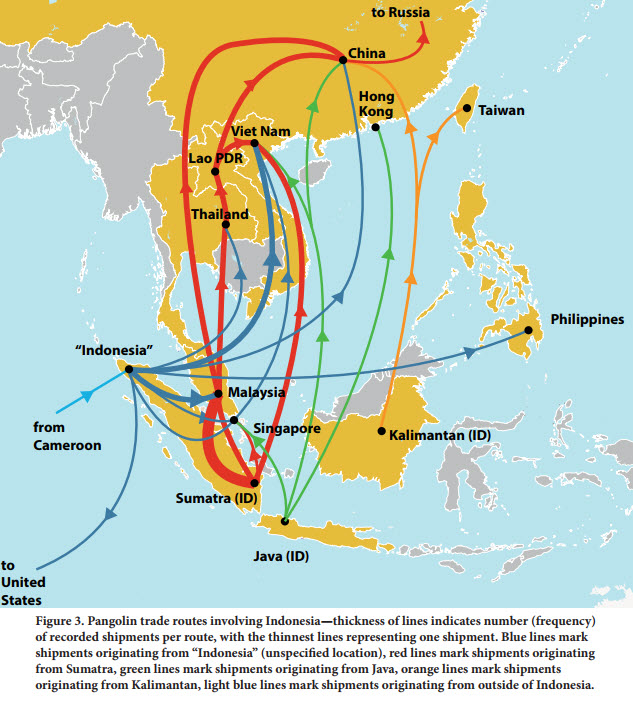 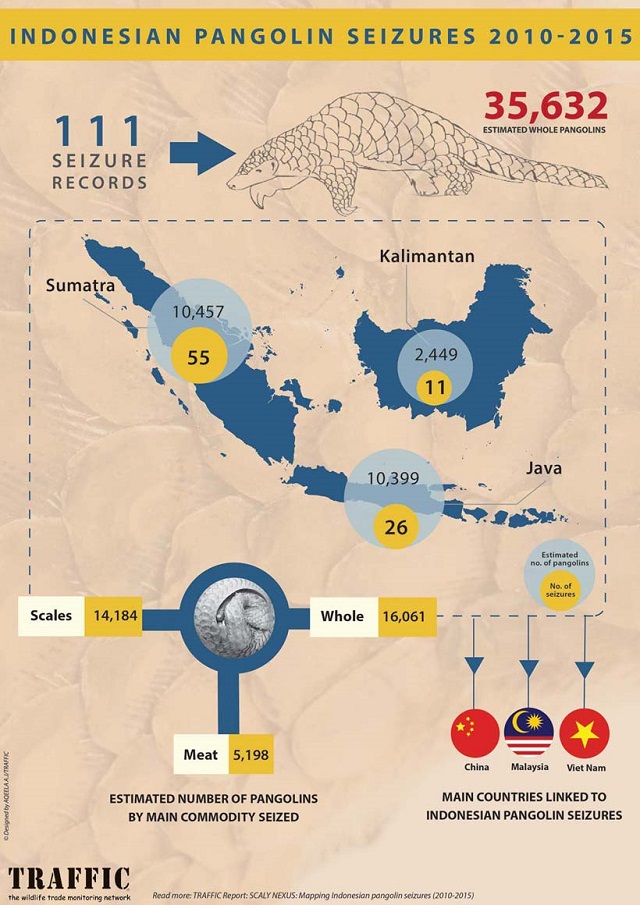