Spin-Offs from Future Twin Channels at the Suez Canal

South Korea's Incheon Port surpassed three million TEU processed in a year. If the containers were connected in a line, that line would be equal to a distance of 24 route trips between Seoul and Busan (380 kilometers, 236 miles).

Incheon Port Authority held a commemoration event and voiced ambitions to become part of the Top 30 Global Ports by 2025. Currently Incheon sits in 47th place, but the port plans to handle 3.5 million TEU by 2020 and four million TEU by 2025.

The port logistics industry out of the Incheon region accounts for 33.8 percent of the nation's gross national product. The port says, 6.4 jobs are generated per 10,000 TEU, so achieving three million TEU in 2017 equates to the employment of 1,920 people. 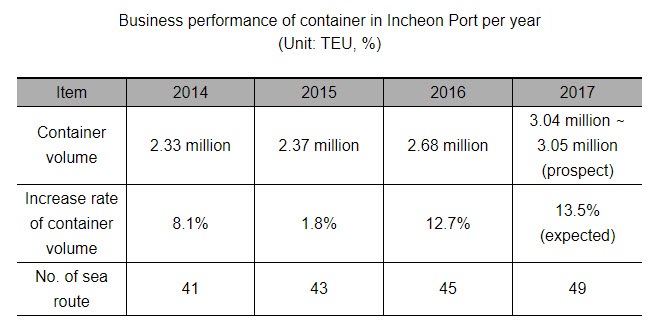 Over the past five years, Incheon's top five ports ports were all ports in China: Shanghai Port, Qingdao Port, Weihai Port, Shekou Port and Dalian Port. Exports to China have grown over the last year, but Incheon has also seen increased volumes to Thailand, Iran, India and Vietnam.

Kim Jong Gil, the director of Incheon Port’s Logistics Strategy Bureau, stated last year that cargo volumes to the Chinese ports would continue to take up the highest share in the future, but cargo volumes to South East Asia are also expected to rise continuously. “In the future, we will strive to satisfy the needs of forwarders of import and export by diversifying the routes through the expansion of coast line services in not only South East Asia but also in the America region.”

Attorneys for salvors Donjon-SMIT filed a lawsuit against the U.S. Coast Guard in the U.S. District Court in Brunswick on Thursday in an attempt to halt salvage operations underway for the capsized car carrier Golden Ray. The Brunswick News broke the news saying that the complaint relates to the U.S. Coast Guard's decision to allow the vessel owner to tender for third-party contractors who were not part of the approved response plan to undertake the dismantling of the ship on...

Spin-Offs from Future Twin Channels at the Suez Canal

The Suez Canal has evolved into the world’s most important man-made navigation passage. Despite recent expansion, further canal expansion is expected over the next decade. The sailing draft of ships would likely increase from 20 meters (66 feet) to 21.3 meters (70 feet) along parallel channels each measuring 315-meters (1,033 feet) in width along with increased sailing beam, ship length and deadweight tonnage that could likely transit oil tankers. Introduction Prior to 1860 and courtesy of development of steam powered...