IMB: Unprecedented Number of Kidnappings in Gulf of Guinea

Despite overall piracy incidents declining in 2019, there was an alarming increase in crew kidnappings across the Gulf of Guinea, according to the International Chamber of Commerce’s International Maritime Bureau’s (IMB) annual piracy report.

The number of crew kidnapped in the Gulf of Guinea increased more than 50 percent from 78 in 2018 to 121 in 2019. This equates to over 90 percent of global kidnappings reported at sea with 64 crew members kidnapped across six separate incidents in the last quarter of 2019 alone. The region accounted for 64 incidents including all four vessel hijackings that occurred in 2019, as well as 10 out of 11 vessels that reported coming under fire.

In December last year, the IMB urged ships' crews to be extra vigilant. On December 15, around six heavily armed pirates boarded a product tanker underway approximately 118 nautical miles off Cotonou, Benin, kidnapping 20 seafarers and destroying some equipment on board. The pirates left a single crew member, a deck cadet, behind. The tanker was sailing from Luanda, Angola to Lome in Togo when the pirates struck.

The incident came days after 19 crew members from a VLCC were kidnapped about 100 nautical miles south of Bonny Island offshore Nigeria on December 3. In this case, seven crew members were left behind.

The U.S. Maritime Administration has also issued an Advisory in the issue of piracy in the Gulf of Guinea, noting that many operations occur around the Niger Delta and target vessels (tankers, tugs, offshore supply vessels, and cargo vessels) with expatriate crew, due to their potentially high ransom value. Motherships have been used to support kidnap for ransom operations up to 150 nautical miles offshore. The pirates have been known to fire upon targeted vessels prior to attempting to board them. They generally kidnap two to six high-value crewmembers to include the master, chief engineer, and any Western crewmembers.

Armed robbery attacks in Indonesian ports dropped from 36 incidents in 2018 to 25 in 2019. Elsewhere, in the Indian sub-continent, Bangladesh reported zero incidents for 2019, a first since 2015.

Somalia reported zero piracy incidents, yet the IMB PRC advises that vessels and crews remain cautious when travelling through the region. 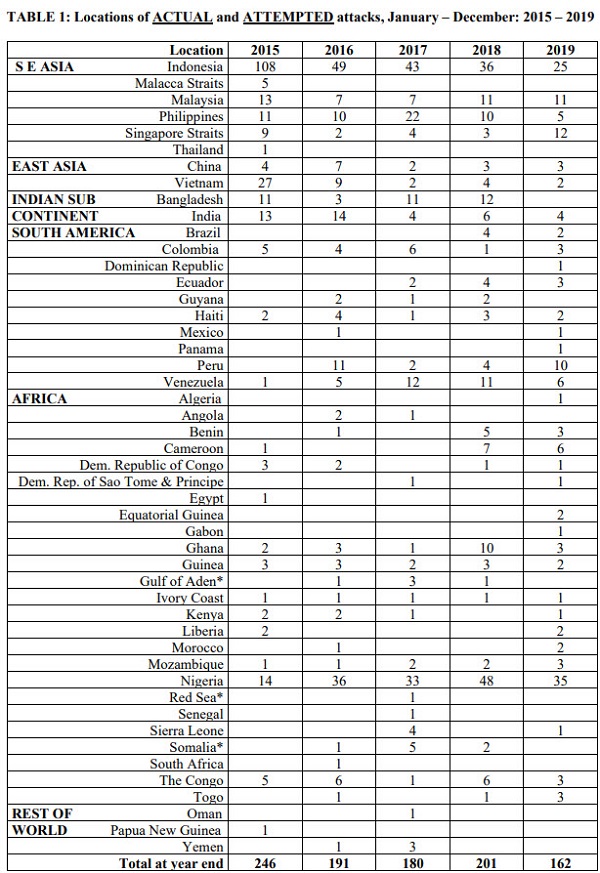 Credit: IMB
* indicates that attacks are atttributed to Somali pirates.