Hyundai Glovis, one of the largest operators of car carriers, reports that it is taking several preemptive steps to increase fire safety and the fire fighting capacity aboard its vessels in response to emerging trends in the vehicle transport industry. The company is adding equipment to its vessels as well as the current monitoring and fire suppression systems, along with training protocols to address the risks including the growth of electric vehicles.

Electric vehicles are widely recognized as a growing challenge for vehicle transporters. While the cause of the recent fire aboard a competitor’s vessel the Felicity Ace is unknown, experts believed the quantity of electric vehicles likely contributed to the fire that resulted in the loss of the vessel as well an estimated $400 million in vehicles. At the time, the fire fighting teams highlighted the need for special equipment due to the presence of electric vehicles.

Operating a fleet of 90 ships, Hyundai Glovis estimated that it transported about 250,000 electric vehicles last year with that number expected to continue to grow. They highlight that an electrical vehicle is heavier than other vehicles. They have decided that electric vehicles will be loaded on the lower decks of the ship as much as possible. They note that these areas on the vessels have the most consistent temperature and that the safety of the vessel can be enhanced while contributing to the efficiency of fire suppression.

The company developed a specialized fire response and prevention system working with Korea Register of Shipping. The research focused on the specialized management for vehicle fires recognizing that the volume of finished vehicles and especially electric vehicles is increasing. The plan includes preemptive measures as well as the introduction of new equipment which will be added to all the line’s vessels within this year.

Hyundai Glovis recognizes that one of the biggest dangers is chain ignition when the vehicles are packed closely aboard a car carrier. Further, if an electric vehicle catches fire appropriate equipment is required due to the differences in the vehicles and the steps required to suppress the fire versus internal combustion engine vehicles. 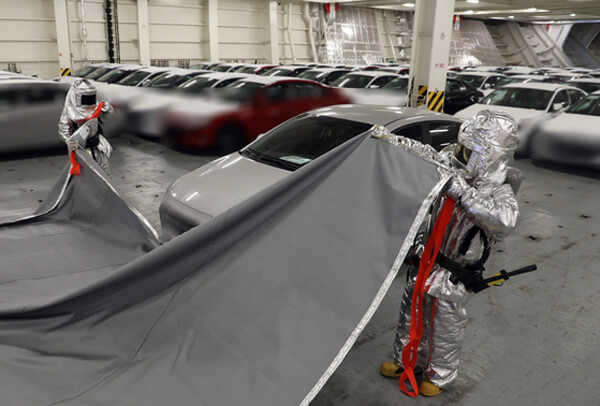 Developed in Norway in 2014, fire covers have proven to be effective in preventing the spread of fire between vehicles even when the vehicles are close to each other in confined spaces such as the deck of a car carrier. The covers are a non-combustible material made of specially coated fire-resistant fibers. The cover is spread over a burning vehicle to prevent oxygen inflow helping to smother the fire while also blocking heat and smoke. Recognizing the varying size of vehicles loaded aboard its vessels, Hyundai Glovis reports it will be deploying fire extinguisher covers that can cover even a large SUV.

Fire crews are also being equipped with a water mist lance with a metal frame. The device has a long nozzle that can spray water or chemicals directly onto a fire and can penetrate enclosed spaces including for example doors. The tube which is more than a meter in length can be inserted into a car or used to reach under a vehicle.

The vessels are also fitted with CCTV on each deck of the cargo hold to check on the condition of loaded vehicles and heat and smoke detectors. Systems monitor temperature throughout the cargo areas. Fire crews are also outfitted with flame-retardant, heat-resistant fire evacuation masks that have filters that can purify toxic gases.

An accident, fire prevention, and emergency manual was also prepared. Compulsory response training will be conducted at least twice a year. Hyundai Glovis says that it believes these preemptive measures will prepare the operations to address the changes taking place in the industry and ensure the safety of seafarers.