Hoisting the First Frame of Ceiba

On the Pacific Coast of Costa Rica, in the “jungle shipyard” - El AstilleroVerde - SAILCARGO Inc. has hoisted the first frame of their vessel, the 148-foot (45-meter) long tallship, Ceiba, completely by hand.

This marks the beginning of a new phase of construction of the three-masted square-topsail schooner, which is designed to carry cargo along the west coast of the Americas. Ceiba is hoped to be a flagship for Costa Rica, transforming the maritime industry by providing a carbon-negative alternative to conventional shipping. 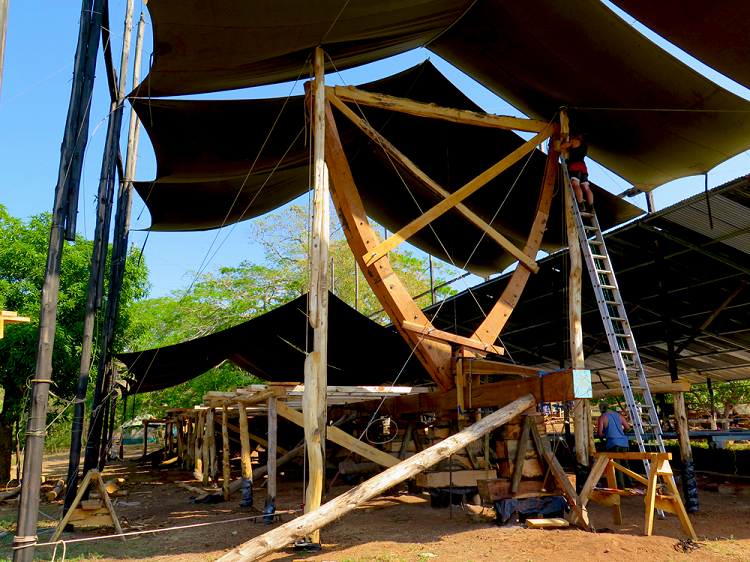 The hoisting of the first frame was achieved with the use of ropes rigged to keel, hanger and hand. Many strong arms heaved ropes through a pulley system, attached to a single mast-post for each toptimber, shear-end of the frame whilst the frame’s floor timber rested directly upon the keel onto which it was about to be placed. The initial 45 degrees of the lift proved to be difficult to achieve smoothly, however, after the hauling mechanism was improved and the team worked more strongly together, the frame swung neatly up into place.

This is the first full forward frame, located just aft of the bow and is fixed together by hardwood tree-nails (also known as trunnels) of Tamarindo del Monte which are wedged in place. Each of the large U-shaped frames, which have a maximum dimension of eight by eight meters, are made from Spanish Cedar and can be made of up to 12 separate pieces of the locally-sourced wood.

The aim is to have a new frame up each week for the next year, totalling approximately 56 weeks of putting all 56 frames together and attached to keel. Alongside, the team also plans to be working on the stem construction of Ceiba, at the bow which will be using the well-known shipbuilding wood, Guapinol (also known as Jatobá). This massive tropical hardwood was brought down in a landslide during the rainy season of last year not far away from the shipyard.

Ceiba will be powered solely using the wind and a 100 percent electric engine, which will charge all of the ship's own energy, functions as both a propulsion system and a generator whilst sailing. The engine will be combined with modern batteries and solar panels so that all auxiliary power is renewably sourced.

An advanced variable pitch propeller will convert kinetic energy into stored electrical energy to power the ship's functions. Due to the high torque efficiency of electric engines, Ceiba's engine will only need to be about 120 horsepower, which is easy half of what would be required for other engine designs.

Her three masts will provide sufficient sail area to sail in very light winds and enough flexibility and maneuverability for sail changes during heavy weather. Having sail area lower to the deck helps to stabilize the vessel, making her safer. Her three-masts also allow for flexibility when loading or discharging cargo, as her spars double as cranes.

Sailcargo chose Costa Rica for the project because of its commitment to carbon neutrality by 2021 and its favorable geographic position and business environment.

The project is being funded as it happens, and more information is available here.