[Brief] Germany’s Kiel Canal was closed to traffic yesterday after a head-on collision of two general cargo ships. One of the main shipping routes in Northern Europe, the canal is reported to be the busiest artificial sea shipping route in the world. Yesterday’s collision backed up traffic for hours along the seaway which on a typical day sees on average 90 ships making the approximately 60-mile transit.

Late morning on March 29, two Cypriot-registered general cargo ships were making the transit when the ships collided head-on while passing near a bridge approaching the city of Kiel near the eastern side of the canal. A witness to the collision told a local television crew, “There was a loud bang and crewmembers were thrown several meters into the air.”

The 3,450 dwt Paivi was heading west in the canal toward Antwerp. The 270-foot vessel reported severe damage to its bow in the accident. The other vessel was the Bjoerke which was heading east to Sweden at the time. The 5,499 dwt vessel, which measures 350 feet in length, also reported extensive damage. 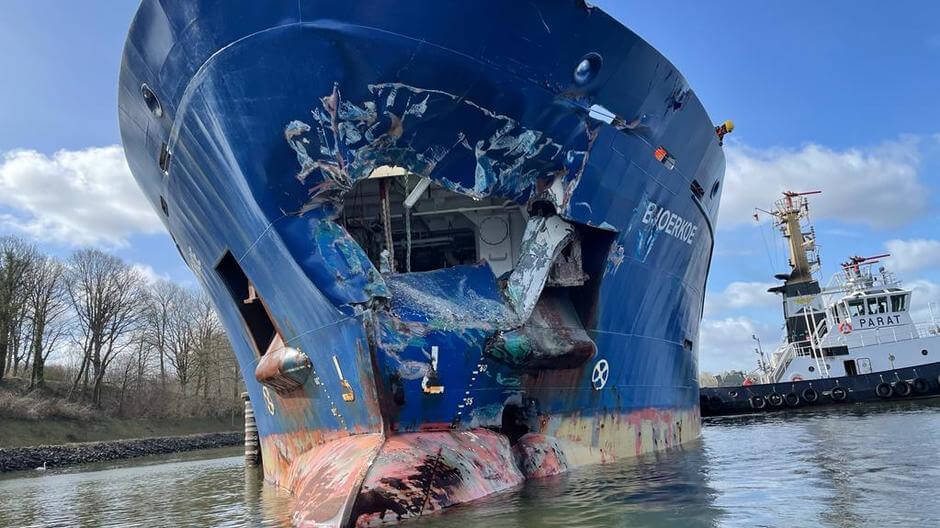 The Kiel fire department assisted by two local volunteer fire companies dispatched more than 30 emergency forces along with a rescue boat to the scene of the accident. They also deployed a drone to survey the full extent of the damage. Three crew members from the Paivi were taken to a local hospital as a precaution with minor injuries.

The operators of the canal reported that both vessels were disabled during the accident with one reporting engine trouble after the collision. Traffic on the canal remained suspended while tugboats repositioned both vessels to berths in Kiel. Federal authorities said they would investigate the cause of the accident, but by late in the day they reported that traffic had resumed moving along the busy waterway.