Norwegian cruise company Havila Kystruten reported that it made history on June 2 becoming the first to operate emissions-free while cruising in Geirangerfjord, a world heritage site. The company demonstrated its battery power system, said to be the largest on any ship in operation, while also discussing the challenges and future potential.

Havila Castor is a 15,800 gross ton cruise ship accommodating up to 680 passengers. The second of four cruise ships built in Turkey for Havila it is 402 feet long and incorporates multiple elements designed to increase operating efficiency and environmental performance. In addition to the battery pack with a capacity of 6.1 Megawatt hours (MWh), the vessel is currently operating on LNG as its primary fuel. The hull is specially designed for maximum energy efficiency, and excess heat from cooling water and sea is used for heating on board.

The company has been promoting that the vessel can operate for up to four hours on its battery pack. During Thursday’s excursion in Geirangerfjord, Havila Castor used its battery-powered propulsion for three hours. It also illustrated the advancements in battery technology. Hurtigruten, by comparison, said three years ago its hybrid expedition cruise ships can comfortably operate on batteries for 45 to 60 minutes.

“We spent just over 60 percent of the battery's capacity on this voyage and that demonstrates to us that the goal of four hours on the battery is achievable,” said Bent Martini, CEO of Havila Kystruten. “With even more testing and adaptation of all energy use on board, we will eventually be able to sail the entire world heritage route emission-free without major challenges.” 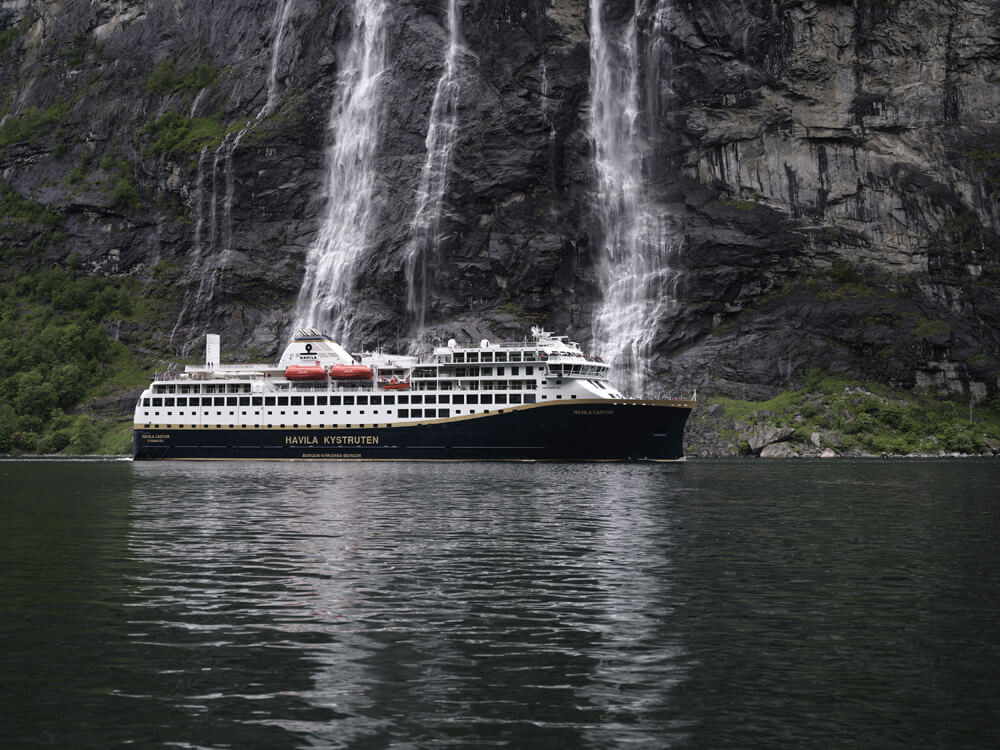 Captain Truls Bruland and Chief Engineer Allan William Johansen highlighted some of the challenges and the close cooperation required to complete the three hours of battery operations for the cruise ship. “This has been a fun, but hectic and special day for us,” said Johansen at the end of the voyage. “When we test the ship as today, there is a lot that needs to be done, and not least it is important that the entire ship optimizes its power consumption, for us to use as much energy as possible on propulsion.”

Before the change to battery operation, the passengers on board were encouraged to be aware of the use of electricity for mobile charging, lights, and heating in the cabin, in addition to the ship's hotel operation reducing its power consumption.

“It requires some resources to cook for over 300 passengers, as well for lighting on board and to heat the ship. When we sail emission-free, we do everything we can to reduce the consumption of electricity, and sailing like this becomes a shared responsibility,” said Sandra Ness, head of climate & environment in Havila Kystruten.

Havila highlighted that the Norwegian Parliament decided in 2018 that cruise ships and ferries must sail emissions-free in Norway’s World Heritage fjords. They said it should happen as soon as technically possible but not later than 2026. Havila achieved the goal four years before the deadline.

“We want to utilize our battery power even further, but to do that we rely on having in place the infrastructure for shore power to charge the ship on clean hydropower,” said Martini calling for increased access to shore power along the coast of Norway. “We hope this will be operational in selected ports of call soon.”

To involve passengers in its environmental programs, Havila Voyages is launching a program on its website. The company is also planning for a gradual blending of liquefied biogas to replace over time the natural gas its cruise ships are currently using for their fuel. Martini noted however to do this requires biogas to be made available to a large enough extent to meet the company’s needs. Other shipping lines ranging from CMA CGM to Maersk have also talked about the challenges of having enough available alternative fuels and have said the lack of the fuels and infrastructure could slow their efforts to deploy next-generation vessels.