Vessels with a combined width of up to 98 meters can now pass each other in a widened section of the Elbe in Germany known as the “passing box.” The five-kilometer stretch now has a width of 385 meters, says the Port of Hamburg.

Similarly, the fairway along the 36-kilometer stretch between Wedel and the mouth of the Stör has been widened from 300 to 320 meters. In this segment, ships with a combined width of 92 meters may pass or overtake each other.

The holding area at Brunsbüttel has also been completed. This has been available as anchorage since the end of last year – when allocated by the traffic control center to ships dependent on the tide, and unable to make the tide window for unforeseeable reasons. 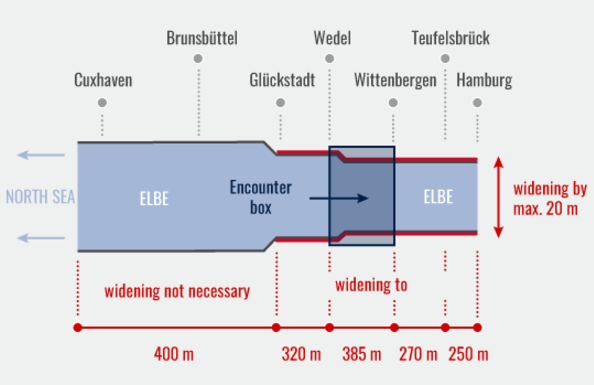 Andreas Scheuer, German Minister of Transport and Digital Infrastructure, said: “We started dredging operations on the Lower and Outer Elbe at the end of July. In our section, the work on widening has now been completed. As soon as the work in the up-river section of the passing stretch through Hamburg has been completed, the combined width of ships passing can be raised. For shipping, this boosts flexibility, efficiency, capacity and safety. Because more and also larger vessels can call and depart simultaneously, the number of mega-container ships can then be more than doubled to 2,800 container ships per year.”

Work is underway to deepening the entire stretch. Both ships dependent on the tide, and those that are not, will gain from one extra meter of loaded draft. The works will be completed next year.