The grounded Seawaymax self-unloading bulker Rt. Hon. Paul J. Martin has been refloated and anchored outside of the port of Johnstown, Ontario, where she is reportedly awaiting repairs.

The Paul J. Martin went aground on October 6 on Galop Island, just outside of Cardinal, Ontario on the Canadian side of the boundary. The vessel was carrying a load of iron ore, and she was taking on water at a slow rate, according to the U.S. Coast Guard. Her own bilge pumps were able to keep up with the water ingress. No fuel tanks were breached, and no pollution or injuries were reported.

In order to lighten the vessel for a refloat, about 5,000 tonnes of her cargo were lightered off using barges. On October 12, after nearly a week aground, she was refloated with tug assistance. According to local ship watcher Michael Fulsom, it took five tugs to bring the vessel back to deeper water.

The incident did not fully halt traffic on the seaway, but temporary speed restrictions and brief halts were implemented as necessary for the salvage effort. 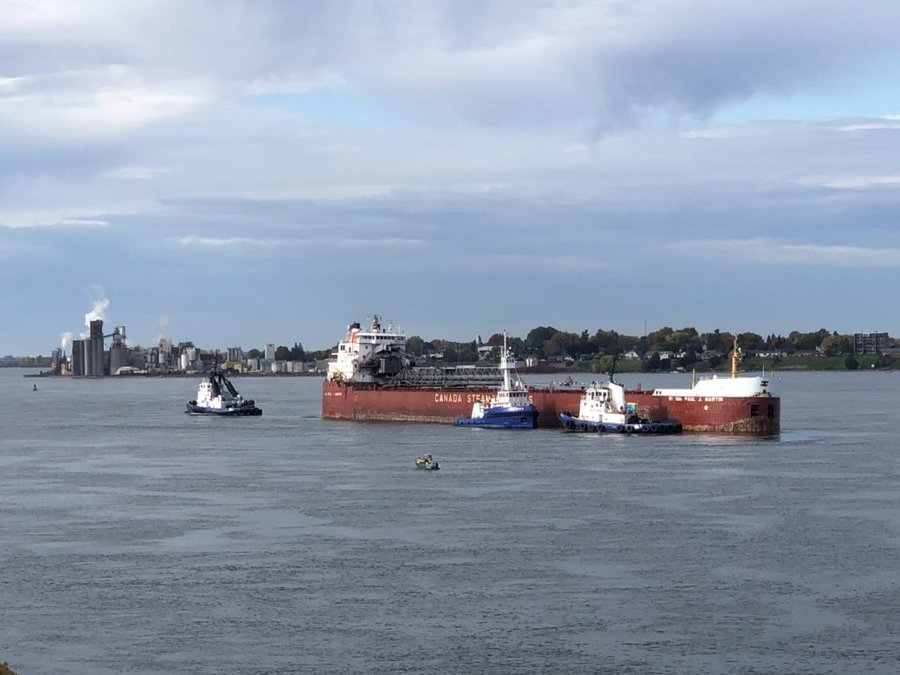 The Paul J. Martin is an unusual vessel. Her stern and wheelhouse previously belonged to the 1973-build laker H.M. Griffith, but the remainder is much newer. In 2000, her owner effectively commissioned a new hull - from the bow through the parallel midbody - and appended it to the H.M. Griffith's accommodations block and engine room. The new dimensions were designed to meet the maximum capacity of the St. Lawrence Seaway system. After this retrofit, the vessel re-emerged from shipyard as the Rt. Hon. Paul J. Martin.