In the early hours of Sunday morning, Greenpeace activists in Germany tagged the hull of the freighter Hiroshima Star with the words "Climate Crime" in hand-painted letters approximately eight feet high. The 80,000 dwt Star is carrying a cargo of soybeans from Brazil, where land-clearing for soy production accounts for an estimated 10 percent of all forest removal activity.

According to satellite monitoring conducted by the Stockholm Environmental Institute and the NGO Global Canopy, about 8,000 square miles of wild land in the Amazon and Cerrado regions has been cleared and converted into soy fields over the past ten years, an area larger than the state of New Jersey. Among other environmental consequences, the act of burning and clearing virgin forest releases large quantities of CO2, and the crops replacing forest have a reduced ability to absorb CO2 going forward. 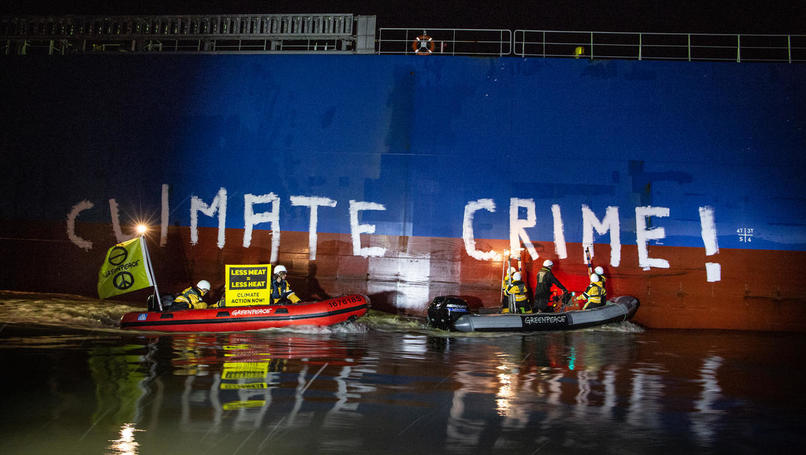 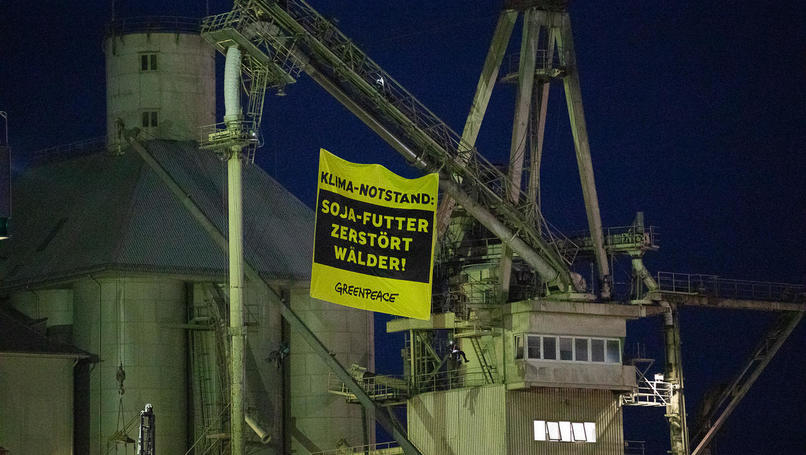 "We urge the [German] government to stop the import of soy from forest destruction immediately," said Greenpeace agricultural expert Dirk Zimmerman. "Only if we eat significantly less meat, we can mitigate the climate emergency even more."

Greenpeace notes that meat consumption fuels demand for agricultural commodities, and it calls on the German government to incentivize farmers to steer away from the business of raising animals for food. Greenpeace suggests that the demand for meat in Europe and North America will have to fall by 70-90 percent by midcentury in order to meet climate goals.

A subgroup of the IPCC is meeting this week in Geneva to finalize its latest report on climate change and land systems. The survey of about 60 scientists describes the climate consequences of global land use, and the group is expected to conclude that around a quarter of man-made greenhouse gases can be attributed to land use.

"Without an end to forest destruction and a significant reduction in emissions from agriculture and livestock, we will have no chance to meet the 1.5-degree global warming threshold agreed in the Paris Agreement," said Greenpeace forest expert Christoph Thies in a recent interview.

Not all countries regret global warming. Take Russia for example: the country is actively pitching its Northern Sea Route, poised to connect Europe with Asia, as a viable alternative to the Suez Canal for maritime commerce. However, satellite imagery is also showing a Russian military buildup in Arctic areas recently freed from ice due to global warming. The reason: Russia securing its northern coastline and opening up the Northern Sea Route.  The country has amassed considerable military strength in the Arctic,...

[By Ida Eir Lauritzen] The maritime industry is looking into the possibility of making shipping emissions-free with the help of the fertilizer raw material ammonia. The new technology is being tested, and if the researchers succeed, the bonus will be increased profitability and more space on board.      In a new project named Aegir, SINTEF researchers will use their years of experience with fuel cells and hydrogen research to provide shipping with an emissions-free fuel alternative. Hydrogen is well...