The environmental group Greenpeace’s protests continued at the oil refinery operated by Preem in Lysekil, Sweden. While the group ended its blockade of the port, six of its protestors were detained by the Swedish police yesterday.

The demonstration began on September 10, when Greenpeace anchored its sailing ship the Rainbow Warrior blocking the entrance to the port of Brofjorden located in western Sweden on the North Sea. They were seeking to call attention to an on-going dispute over the proposed expansion of one of Sweden’s oil refineries. The sailing ship with its launches circling to draw attention to the protest blocked the crude oil tanker Grena Knutsen from docking at the refinery and trapping several other tankers in the port. 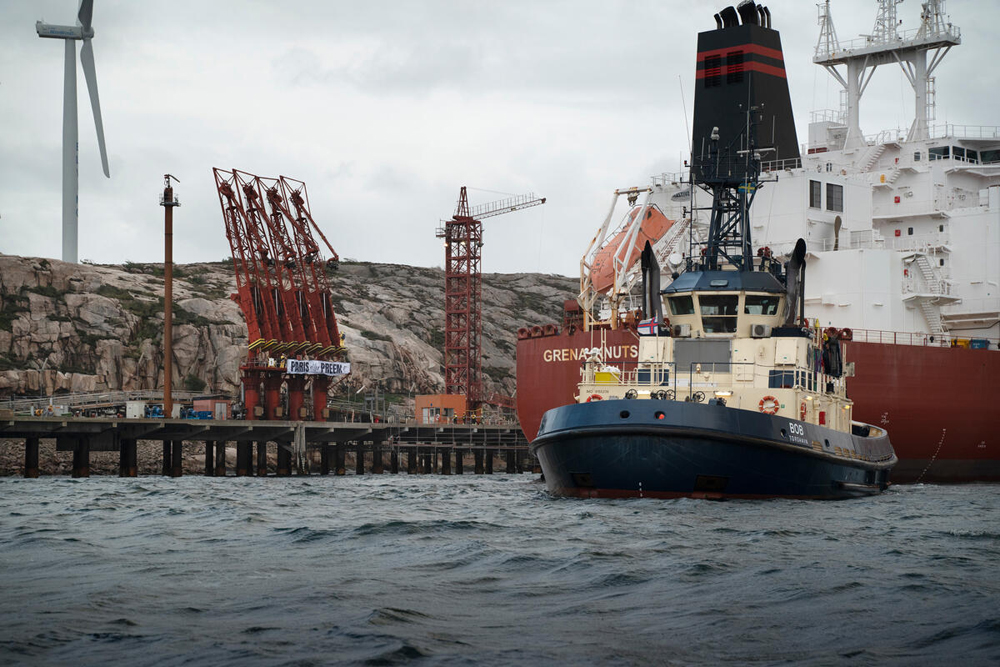 Continuing to block the port into the weekend, Greenpeace later moved the Rainbow Warrior out of the entrance channel to the anchorage outside the port. As the Grena Knutsen attempted to approach the oil refinery on September 13, Greenpeace again used its launches seeking to block the ship while six of its activists climbed the cranes used for offloading of crude from the tanker. The Greenpeace demonstrators unfurled a banner as part of their protests. The six individuals, who Greenpeace said were all trained climbers using special safety gear, were later detained by the Swedish police.

Greenpeace highlighted that it had blocked the offloading and transportation of oil for more than 62 hours. It was part of their initiative calling on Sweden’s Prime Minister Stefan Löfven and the Swedish government to stop the planned expansion of the Preem refinery in Lysekil and abide by the terms of the Paris Agreement designed to fight climate change. Greenpeace said it had the support of prominent celebrities including pop stars and actors as well as climate activist Greta Thunberg. Greenpeace contends that the expansion of the plant would further contribute to hardful emissions tied to the plant and its oil products.

Operations appear to have resumed at the Preem oil refinery. The Grena Knutsen docked and later left the refinery for the anchorage outside the harbor where the Rainbow Warrior also remains.

Preem, the largest oil refiner in Sweden has asked Sweden for permission to expand the oil refinery and is currently awaiting a decision from the prime minister. The company previously promised to produce more biofuels and to use advanced technologies, including carbon capture, to reduce the impact of emissions linked to the operations.