Activists from the Greenpeace ship Rainbow Warrior intercepted a tanker transporting fish oil from West Africa as the vessel entered the English Channel earlier today. The vessel was delayed but able to proceed without incident while the protestors sought to call attention to what they said is an alarming growth in the export of fishmeal and fish oil from West Africa. Greenpeace is demanding action by importers and regional governments to end this trade.

“This is big business stripping life from our oceans and depriving our fishing communities of their livelihoods. The science is clear, it will soon be too late. They must stop now,” said Dr. Aliou Ba, oceans campaign manager for Greenpeace Africa.

According to Greenpeace, every year, more than half a million tons of fish are caught from West African waters to be processed as fish meal and fish oil to feed farmed fish, livestock, and pets in Asia and Europe. In 2020 from Mauritania alone fish meal exports rose by 16 percent with fish oil exports to the European Union up six percent in the same year. The environmental group says that this amount of fish would be enough to feed 33 million people in a region subject to significant food insecurity. They also blame the over-farming in the region for driving up fish prices. 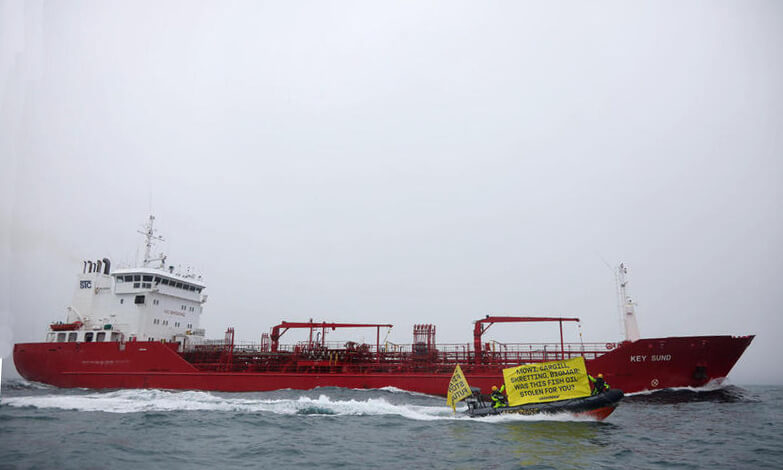 Greenpeace’s Rainbow Warrior approached the Norwegian registered tanker Key Sund in the English Channel off the northern tip of Normandy. The 4,700 dwt vessel is sailing from Agadir, Morocco and arrived overnight in the French port of Fecamp.

The Rainbow Warrior, well-known for its anti-whaling and sealing campaigns, launched it inflatable, fast intercept boat which sailed alongside the tanker. Activists held up a banner reading: “Cargill, Mowi, Skretting, BioMar: Was this fish oil stolen for you?” while an audio system played recordings in which fishers and fish processors from West Africa who could not join the action due to the pandemic vowed to continue their fight against the fishmeal and fish oil importers. The processors were accusing the four companies, which Greenpeace says make up 70 percent of the trade, of stealing fish from their community and threatening their jobs and a key source of food.

Greenpeace is demanding that fishmeal and fish oil importers stop sourcing fishmeal and fish oil from West Africa. Additionally, campaigners are calling on the region’s governments to phase out the use of fish fit for human consumption in the production of aquafeed and animal feed and to establish effective regional management of small pelagic fish resources. Greenpeace is also campaigning for a Global Ocean Treaty to allow for the creation of vast ocean sanctuaries, free from harmful human activity, across more than a third of the world’s oceans by 2030.