Greenpeace activists from Denmark, Sweden, Norway, Finland, and Russia took to the seas in kayaks and rubber boats, and even swam, in an attempt to block the transshipment of Russian old between two crude oil tankers off the Danish port of Skagen. It was their seventh demonstration in the past two weeks aimed at blocking the movement of tankers and the transfer of Russian oil in Denmark and is similar to other efforts staged by the group in Europe and the United States.

Eleven protestors started on Thursday morning putting themselves in between a supertanker, the Pertamina Prime, and a smaller crude oil tanker, the Seaoth, arriving from Russia carrying a reported cargo of 100,000 tons of Russian crude. Reuters reported that the cargo was part of a contract with Trafigura, but the trading company did not confirm the shipment while telling Reuters that it condemns the war in Ukraine and is only completing required existing contracts agreed prior to the invasion.

The protestors came alongside the Singapore-flagged 301,781 dwt Pertamina Prime, which has been laying at anchor off Denmark. They painted their slogan “oil fuels war,” on the 1,082-foot hull of the vessel and sought to attach a raft to the vessel. The kayaks and rubber boats positioned themselves between the supertanker and the arriving Seaoath, a 105,000 dwt crude tanker flagged in Malta. They refused to comply with requests from the arriving tanker to make way with reports indicating that they were preventing the transfer of the oil. 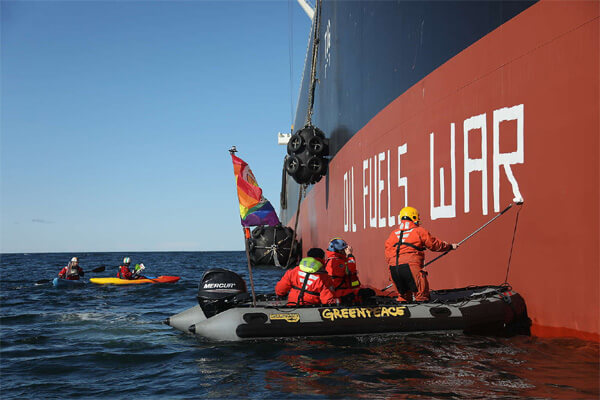 Four members of Greenpeace remained overnight alongside the tanker in the raft and this morning again refused the request of a Danish pilot to clear the way so that the tanker could come alongside. At around 7:00 a.m., the Danish police arrived in their boats and again asked the protestors to move. Greenpeace said the protestors were later removed while the police reported that the protestors withdrew Friday afternoon and went ashore quietly. Either way, the transfer of oil commenced.

"We are really proud that after two weeks of repeated attempts, we managed to block 100,000 tons of Russian oil for almost a day,” said Sune Scheller, who has been part of the blockade and a campaign manager at Greenpeace in Denmark. “Now, once again, we strongly urge politicians to take over the task from us and introduce a ban on all imports and transshipments of Russian oil. The situation we have right now, where the state-owned Danish company Danpilot is helping to reload Russian oil in Danish waters, is approaching state support for Putin's war machine."

Greenpeace reports that its newly launched tracking app has documented at least 299 tankers that have left Russia since the invasion began. They report that 132 of the tankers were heading to Europe.

Today’s demonstration followed earlier efforts in Denmark that began in mid-March. Greenpeace activists tried to block oil tankers with Russian oil from arriving in Denmark, as well as one tanker that was bound for Rotterdam. They have painted their slogan “oil fuels war” on the hulls of several of the tankers while repeating their demand to stop the trade in Russian oil and the broader calls to end the use of fossil fuels worldwide. 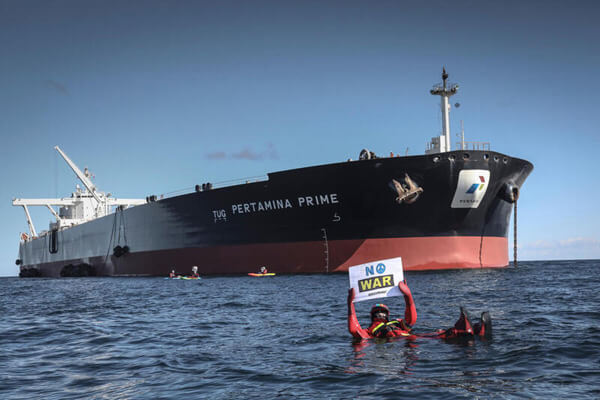