In the course of preparing for the Federal Court trial brought on by Animals Australia, Australia's Department of Agriculture has conceded that the export permit it granted to Emanuel Exports to export 58,000 sheep to the Middle East in June was invalid due to the official granting the permit not having the delegated authority to do so.

Animals Australia was to argue that the required animal welfare standards cannot be met during live sheep voyages to the Middle East in the Northern summer months, and thus, that this export permit should not have been granted. The sheep sailed on the livestock carrier Al Messilah at a time when temperatures in South Perth typically range from eight to 18 degrees. Live export destinations in the Persian Gulf are among the hottest places on earth and may be reaching 40-50 degrees during the Middle Eastern summer.

“This admission of legal error by the Department heightens existing concerns about their ability to regulate the live export trade,” said Animals Australia’s Legal Counsel, Shatha Hamade. “Animals Australia continues to believe that required animal welfare standards cannot be met on sheep shipments during the Northern summer. As such, we will not hesitate to challenge other Department decisions that we believe are not compliant with the regulatory regime.”

The Department may be required to pay several hundred thousand dollars in legal fees as a result of the admission, and the situation has drawn some cynical responses as it comes under criticism over its regulatory actions for the live export industry - now the center of a nation-wide debate. In a blog post, Vets Against Live Export stated: “One has to ask the question was it easier to roll over and admit an administrative error than have evidence produced in court which would show up their 'cowboy culture' to a much greater degree.”

The live export trade has been under intense scrutiny since evidence of systemic breaches of regulations and the routine suffering of sheep at sea were exposed. Whistleblower footage released on a 60 Minutes program in April showed images on board an August 2017 voyage of the Awassi Express to the Middle East for Emanuel Exports when 2,400 sheep died of heat stress. Throughout the program, footage from five separate voyages is aired depicting thousands of sheep suffering severe heat stress; sheep caked in melted feces and urine; injured and sick animals left to die slowly; decomposed bodies left in pens with living sheep and pregnant ewes giving birth and their lambs dying.

The global live export fleet is the oldest saltwater fleet in operation, and the Australian Maritime Safety Authority (AMSA) inspected the Awassi Express, built in 1990, 39 times in the five years before whistle blower footage was aired. Shortly after it aired, AMSA inspected the vessel again and demanded a third party air flow verification report to prove compliance with air flow standards before the vessel would be authorized to depart Australia again. Subsequently, works were conducted on the vessel's ventilation system and an automatic system for providing water to livestock was installed.

Earlier this month, the Department suspended the license of livestock exporter EMS Rural Exports, thus preventing the shipping of 45,000 of the 60,000 sheep currently stranded in Western Australia to the Middle East. EMS Rural Exports is a sister company of Emanuel Exports whose license had already been suspended.

Another livestock exporter, Livestock Shipping Services, has since announced that it won't export of sheep to the Middle East during the summer months. Harmony Agriculture and Food Company’s entity Phoenix Exports has also confirmed that it has canceled plans for a small shipment of fewer than 15,000 sheep to the Middle East which was due to leave Fremantle later this month.

The sheep that had been due for export by Emanuel Exports remain in a registered feedlot in Perth. The sheep have been inspected by the Department’s veterinarians and deemed to be in good health and well-cared for.

ABC News has reported that livestock exporter Wellard might apply to ship the sheep. In June, the company issued a statement saying: “It is Wellard’s position that sheep can be safely exported to the Middle East in a manner that meets community expectations provided the right shipping regulations, the right onboard management practices and the right levels of accountability are in place. We believe that the tough new rules implemented by the Government will bring about positive change across the industry.

“The current changes proposed to Australian livestock shipping standards, which are governed by Marine Order 43 and are proposed to come into force at the start of 2020, will place Wellard in a position that will reward the company for its investment in a young, purpose-built, technologically advanced fleet of livestock vessels.”

However, Wellard has had its share of controversy in the past, with a mechanical breakdown implicated in the death of 1,654 sheep in 2014 on the Ocean Drover, built in 2002. The company claimed a longer than normal voyage duration, due to mechanical issues which forced the vessel to stop for repairs and then travel at 70 percent of her normal high speed, as well a change in feed, were the main causes of the mortalities.

Additionally, the company was associated with a voyage that resulted in around 21,000 sheep being clubbed, stabbed and some buried alive in Pakistan. The voyage began on August 4, 2012 when Wellard exported a consignment of approximately 75,000 sheep destined for Oman, Qatar and Bahrain on board the Ocean Drover. Following the discharge of part of this consignment in Oman and Qatar, the Ocean Drover sailed to Bahrain with the remaining sheep. After a series of delays in the unloading of the sheep in Bahrain between August 21 and September 1, Wellard requested approval to discharge the sheep in Pakistan. The Australian government approved the request, and approximately 21,000 sheep were discharged in Pakistan on September 5.

The Department of Agriculture subsequently investigated the incident and found that police had escorted Wellard employees away at gunpoint prior to the cull. As a result, the government said that Wellard would not be sanctioned for the incident. However, some of the staff from the local importer, PK Livestock, recorded footage of the cull on their mobile phones. Wellard subsequently released a video statement, including images of the sheep being killed. The video was released on November 4, 2012 - just prior to a Four Corners TV program about it aired on November 5.

As a result of the most recent whistle blower footage, regarding the Awassi Express, politicians and voters from a spectrum of political parties have spoken out against the trade. The Labor Party, currently in opposition, has committed to phase out the live export of sheep.

Earlier this month, the Australian Livestock Exporters' Council issued a statement saying animal welfare needs to be the highest priority. "It is now less than six weeks until Eid al Adha (The Festival of the Sacrifice), an important religious period in the Middle East when cultural traditions drive a spike in demand for Australian sheep for local slaughter. With this in mind, it is vital for those working in the rural sector, including producers and associated industry employees, as well as our customers overseas, that the short-term and long-term future of the trade is secured." 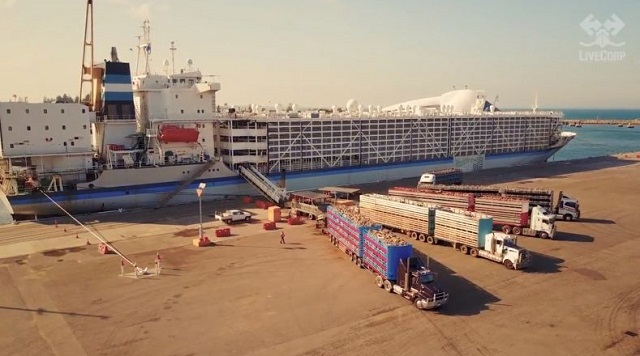 New Zealand banned the live sheep trade in 2003 after Saudi Arabia rejected a shipment of 57,000 sheep on board the Cormo Express. After two months at sea and unable to find port, around 6,000 sheep died on board and the rest were gifted to Eritrea where they were slaughtered in small makeshift abattoirs.