Golden Ray Team to Use Explosive Charges as Operations Resume

After a nearly two-week pause for maintenance, the salvage team working on the removal of the remaining sections of the Golden Ray wreck resumed their cutting operations. There are three cuts to be completed to remove the last four center sections of the vessel, but the team has been encountering a series of challenges that have delayed their progress.

Efforts are currently focusing on separating section three from the remainder of the Golden Ray wreck, but the cutting chain path is being obstructed by reinforced steel brackets inside the vessel. To execute precise cuts through the obstructions, the Unified Coast approved a plan permitting the use of “Low Hazard Flexible Linear-Shaped Charges” on an as needed basis by the response engineers and the salvage master. The Unified Command consulted with engineering and environmental experts from federal and state agencies during the planning and permitting process before approving the use of the explosive charges.

Federally licensed and qualified personnel will follow strict safety protocols for the storage, transport, and handling of the cutting charges the command reports, but they believe the environmental impacts will be minimal because all cutting charge detonations will be confined to the interior of the wreck above the water line and remotely fired from a safe site on the topside of the wreck. Fire suppression systems will be energized before, during, and after the use of the explosive charges. 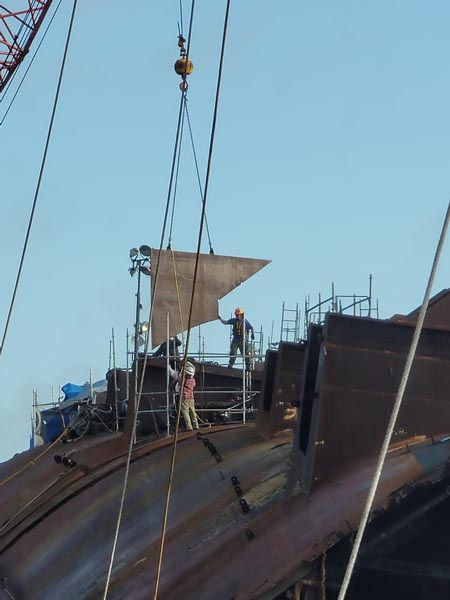 “Safety is our highest priority,” said U.S. Coast Guard Cmdr. Efren Lopez, federal on-scene coordinator. “By using the cutting charges, we can greatly reduce any safety risks to our personnel when accessing the interior of the wreck to clear any obstructions while continuing a removal operation that safeguards the community and the environment.”

This comes as welding technicians continue to make repairs to the side plates of the lifting lugs for sections four, five, and six on the topside of the Golden Ray wreck. The side plates of the lifting lugs deformed due to heat generated during the fire that occurred inside the wreck on May 14. Response engineers will reinspect the lugs once the repairs are complete.

Two utility tugs continue to stand watch at the site as part of several vessels that remain around the clock to monitor and mitigate any potential environmental impacts. The safety zone around the operation was also expanded from 150 to 200 yards for recreational vessels, while the Unified Command advises mariners to steer clear and discourages anyone from attempting to overfly the area with unauthorized drones. Command personnel also continue to monitor the air and water while shoreline survey teams continue to recover small amounts of debris and weathered oil material from Jekyll Island and St. Simons Island. All debris is sorted, cataloged, and disposed of according to the response plan. 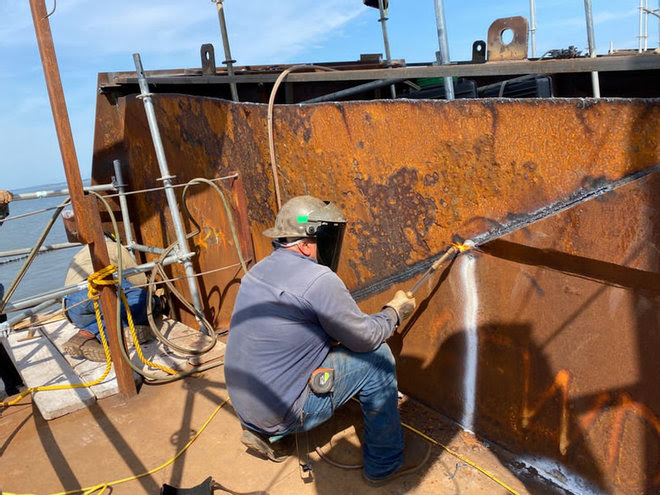 Welder cuts through a deformed side plate 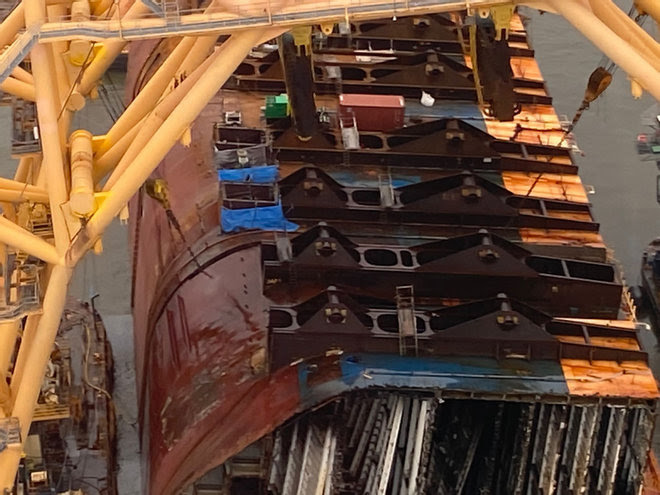