Seventeen months after filing for insolvency, Germany’s Flensburger Schiffbau-Gesellschaft (FSG) shipyard has won its first new international order. The order for an LNG-powered RoRo is notable during the pandemic but especially important for the troubled shipyard which lost orders and with the pressures of the past year seemed destined to close.

The Tasmanian-based Australian shipping company, SeaRoad, had been shopping for a new build as part of its fleet upgrade program. The company decided to return to FSG based on its experience with the shipyard and favorable terms for the new contract. FSG built a prior RoRo for SeaRoad, the MS Searoad Mersey II, which joined the SeaRoad fleet in 2016 and the company is currently operating a second newly-built FSG RoRo under a three-year charter. FSC delivered the MS Liekut in March 2020 to Siem but the vessel did not enter service. Siem chartered the ship in March 2021 to SeaRoad, which said it intended to operate the RoRo as an interim ship until it could build its new ship.

“We’ve been very pleased with how the two FSG-built vessels in the SeaRoad fleet have performed from both an efficiency and operational perspective,” says Chas Kelly, Executive Chairman of SeaRoad. “We look forward to continuing our successful relationship with the German shipyard and their experienced staff.” 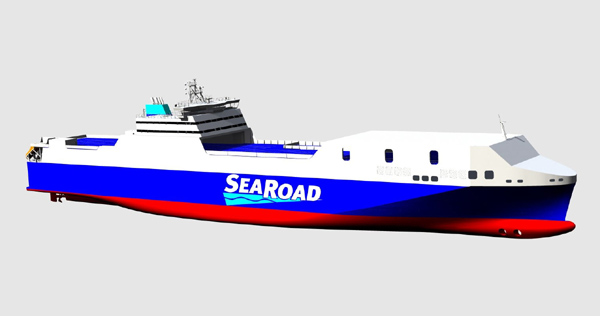 Rendering of the newbuild to be delivered in 2023 (SeaRoad)

Work on the new RoRo vessel will start in late 2021 or early 2022 and is scheduled for delivery in the last quarter of 2023. At over 40,000 gross tons and measuring 689 feet in length with a beam of 96 feet, this will be the largest freight vessel in SeaRoad’s history, providing more transport options for the local agriculture, aquaculture, and manufacturing industries. The vessel will. In addition to a large vehicle capacity, the vessel will have the ability to transport heavy cargo with a unit weight of up to 100 tons. The new vessel will operate on the Bass Strait between Devonport, on the island of Tasmania, and Melbourne, Victoria on mainland Australia.

The order which was valued at over $115 million, is a critical step for FSG. In April 2020, the yard filed for insolvency as part of an ongoing restructuring. In 2019, Tennor Holdings resumed ownership of the yard from Siem and a period of troubled operation that saw late deliveries, cost overruns, and finally the cancelation of a key contract from Australia. Tennor completed the restructuring in September 2020, promising to revive the operation.

Philipp Maracke, CEO of Flensburger Schiffbau-Gesellschaft, adds, “We are proud to have brought this order to Flensburg as it is proof of the shipyard’s successful new start. This additional order by a long-standing customer equals an important vote of confidence in both this new model, as well as our established expertise as an innovative German newbuilding yard. Our aim is to combine superior quality and superior life-cycle value. With this new vessel, FSG and SeaRoad will make an important contribution to sustainable shipping.”