The first Genco bulker, the 58,000 dwt Genco Pyrenees, chartered to FedEx Logistics arrived this week at the Port of Hueneme, California. The logistic giant took a creative approach working with the port and the Chinese shipping company both to bypass the congestion at southern California ports and provide a service to manufacturers. The vessel arrived in the port about 60 miles north of Los Angeles at the beginning of this week, the first of three currently scheduled ships but the company says it is exploring expanding the service.

Port Hueneme first announced last fall that working with the U.S. Navy that would be making additional space available for commercial ships when the port facilities were not busy with Navy traffic. Putting to use its longstanding 2004 Joint Use Agreement with the Navy, Hueneme was able to accommodate the chartered bulkers that FedEx is using to transport its containers. Port officials said that the cargo will initially be staged on Navy property to avoid disruption to the critical existing services at the port.

The 623-foot Genco Pyrenees departed Humen, China on January 4 with ceremonies marking its arrival in California on January 31. The bulker was carrying 184 containers loaded according to the port with essential commodities such as electronics, automotive materials, and garments, as well as general department store merchandise.

FedEx came up with a very creative solution that met its needs while offering an essential service to manufacturers frustrated by the supply problems making it difficult to get their goods made in China to the California ports. As first reported by American Shipper, FedEx was looking to move 53-foot containers built in China that will become part of the FedEx Freight intermodal network in Southern California when they decided to charter the vessels. Instead of bringing the boxes, which are made to rail standards for use in double-stack trains to ship goods within North America, empty, that’s when FedEx decided to offer manufacturers the opportunity to load their goods into the company’s new boxes. 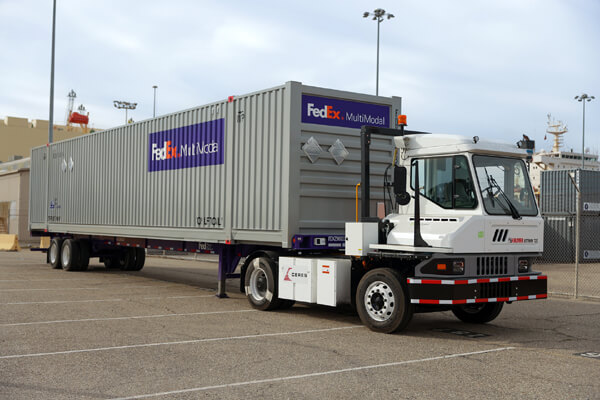 “Thanks to the innovative thinking and dedication from the FedEx Logistics and Port of Hueneme teams, we are able to turn a challenge into an opportunity and help our customers with this solution,” said Udo Lange, President & CEO, FedEx Logistics.

Port officials reported that this operation is the first of multiple chartered vessels scheduled to come to Hueneme. The second vessel chartered to transport FedEx Logistics’ containers was expected to depart China around the end of January and will be followed by a third charter trip approximately a month after that. The port’s chief operations officer, Christina Birdsey, told the Ventura County Star newspaper that the subsequent vessels could be carrying upwards of 250 containers on each trip. In addition, the port is now reporting that FedEx plans to schedule more over the next year based on success with the initial services.

“We worked together to have the entire logistics network in cue to move the cargo through each of the supply chain partners-from origin, ocean and trucking to destination facility,” said Dona Lacayo, CCO & CPAO of the Port of Hueneme. “We thank FedEx Logistics and all of the project partners for a great collaboration and for making the first FedEx ocean charter a great success.”

FedEx reported that it expected to cut the transit time by over 20 days docking at the Port of Hueneme. With FedEx-owned chassis lined up and truckers ready, the cargo will make a quick departure from the base to distribution facilities lined up off-port on its way to the customer’s distribution centers. 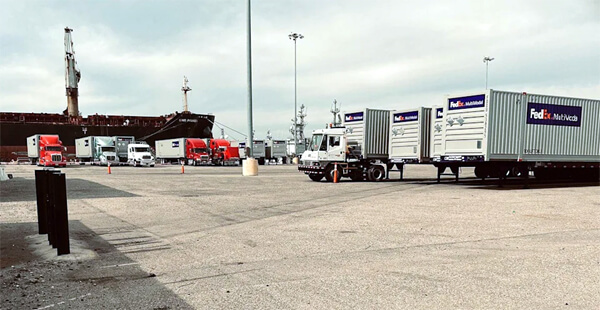 Fedex trailers with the bulker in the background (Port Hueneme)