Included within the current $1.5 billion appropriations bill that funds the U.S. Government through September 2022 is funding for the fifth MARAD training ship for the state maritime academies. On Tuesday, March 15, President Joe Biden signed into law the Consolidated Appropriations Act, 2022, which provides the funding for the projects and activities of the federal government, including $782 billion in defense spending, $730 billion in non-defense agenda items, funding for additional COVID-related programming, and a last-minute addition of $13.6 billion in military and humanitarian aid for Ukraine.

Each of the vessels being built in a program managed by Tote Services at the Philly Shipyard is being assigned to one of the state maritime academies. The fifth and final vessel of the program covered in the current funding will be assigned to California State University Maritime Academy (Cal Maritime) in Vallejo, California. No timeline was released for the vessel as official contracts will still have to be completed, but Cal Maritime said the training ship known as a National Security Multi-Mission Vessel (NSMV) is expected to be delivered within the next three to five years.

“This moment is remarkable – it culminates eight years of work by the Consortium of State Maritime Academies and for the first time, provides brand new training vessels for our cadets,” said Tom Cropper President of the university calling it a historic moment for Cal Maritime. “We are grateful for the funding of this new ship.”

Historically, the state maritime academies have relied on retired and retro-fitted vessels to train their cadets. The ships have been outclassed by newer vessels and lack some of the most modern elements that the cadets will experience when they go to sea.

According to MARAD which leads the program, the NSMVs are highly capable, modern, and versatile, which will elevate the level of training and shipboard experience for those aboard. The new ships are designed to provide professional training for future mariners as well as to support humanitarian assistance and disaster relief missions. They feature numerous instructional spaces, a full training bridge, labs and simulators, and accommodations for up to 600 cadets as well as 100 officers and faculty. Emergency capabilities include a modern hospital, helicopter pad, a ro-ro ramp for loading, and space to store up to 60 TEU. 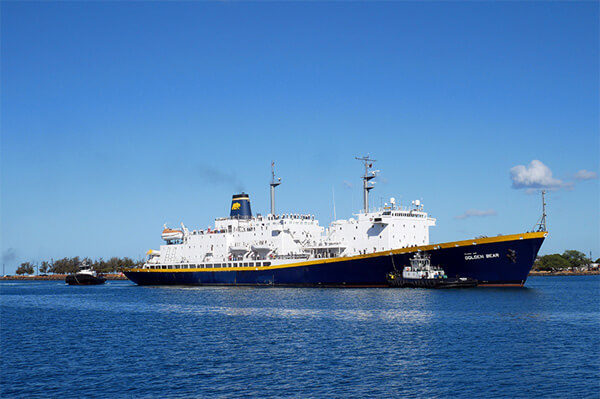 The new vessel will replace Cal Maritime’s current Training Ship Golden Bear, a 12,500 gross ton vessel built for the U.S. Navy. Commissioned in 1989, as a hydrographic survey vessel to map the deep ocean floor she was in service till 1994 and two years later assigned to Cal Maritime as their training vessel. She is a sister ship to the training vessel assigned to Maine Maritime Academy.

Construction of the first of the new training vessels began in December 2020 with the first steel cut and keel laying a year later. The vessel is expected to enter service in 2023 for SUNY Maritime College in New York. Fabrication for the second vessel began in March 2021 and she has been assigned to Maine Maritime. In 2021, MARAD authorized construction of the third and fourth vessels with those being assigned to Massachusetts Maritime Academy and Texas A&M Maritime Academy.

Each of the vessels will be approximately 8,500 tons (deadweight) with a length of 525 feet and a beam of nearly 89 feet. They will be powered by four diesel-electric motors with a speed of 18 knots and approximately an 18,000 nautical mile range. They will be fitted with both bow and stern thrusters.

Cal Maritime said it is excited at the prospect of receiving the new vessel explaining in addition to being able to double capacity aboard ship the new vessel incorporates modern technologies and equipment for the cadets’ training. As the vessel is larger than their current training ship, Cal Maritime anticipates about 18 months of upgrades to its pier to accommodate the new ship.