Two local fire companies were called to the northern Florida port of Fernandina to battle a cargo fire on a vessel docked at the port’s north terminal. Due to difficult access conditions, the stubborn fire took more than four hours to control and another two hours to be declared extinguished.

The U.S. Coast Guard received a call shortly before midnight from a Panama-flagged bulker named Amber Star docked in Fernandina reporting a fire in one of the vessel’s five cargo holds. The 37,692 dwt bulk carrier built in 2017 arrived in the port on Saturday, June 25 transporting a cargo of bundled plywood. She had departed Malaysia in May arriving first in Charleston, South Carolina before proceeding to the Florida port.

According to the U.S. Coast Guard, the Fernandina Beach Fire Department, and Nassau County Fire Rescue, they arrived to find heavy smoke coming from one of the vessel’s holds. The ship’s crew was attempting unsuccessfully to extinguish the fire with onboard fire suppression systems upon the arrival of the first fire units. They determined that the fire had started within the number five cargo hold loaded with stacks of bundled plywood being unloaded at the port.

“Due to the unstable nature of the cargo and the unknown location of the fire, firefighters had to flow water into the ship’s cargo compartment continually,” according to the fire department. They said that their firefighters could not enter the cargo hold to attempt to bring the fire under control, so water streams had to be applied to the compartment from above with hose lines and an aerial apparatus. Firefighters worked to keep the fire from spreading to other areas of the ship’s compartments. 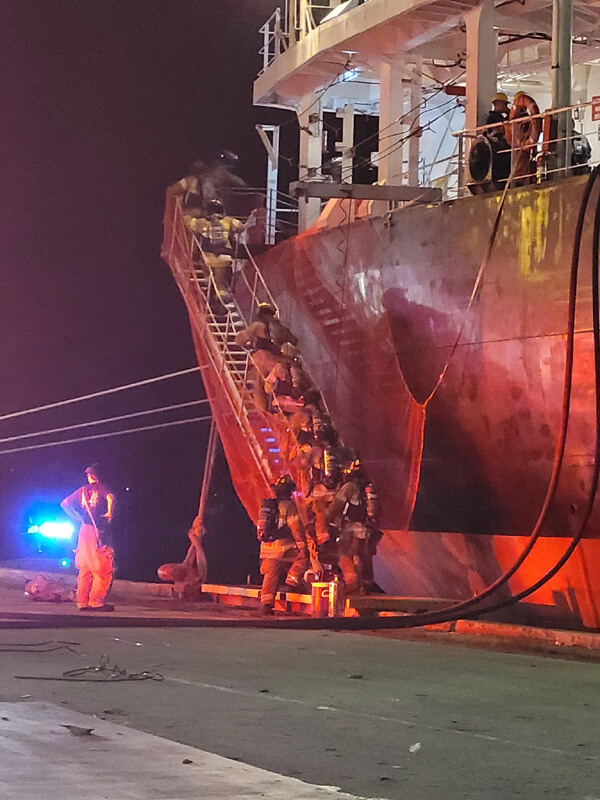 Thirty-five firefighters battled the fire until 4:18 am when the fire was determined to be under control. Firefighters officially called the fire out at 6:17 am. One firefighter was transported to a local hospital with a non-life-threatening injury. There were no reported injuries to the ship’s crew. The fire crews were successful in containing the fire to the single hold.

Fire department officials and the U.S. Coast Guard said the cause of the fire has not been determined and will take some time due to the condition of the cargo hold. The fire’s origin is currently under investigation by the United States Coast.