Despite the skillful intervention of a tugboat crew and a team of rescue divers, five helicopter passengers died after their aircraft crashed and flipped over in the East River on Sunday night.

The sightseeing flight took off from a heliport in New Jersey at dusk on Sunday night and headed for New York. Its passengers intended to take photos of the city, and the helicopter they had chartered was specially modified for this purpose. The flight's organizer, FlyNYON, advertises a "NYC experience" featuring "doors-off flight." Passengers are restrained within the aircraft with a proprietary "8 Point Safety Harness System (SHS)," similar in appearance to a rigger's harness for working aloft. 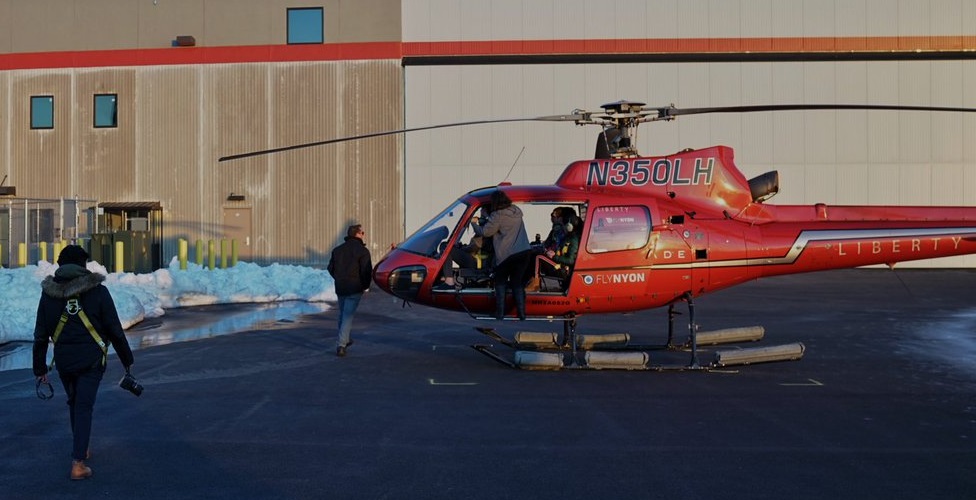 The helicopter just prior to the accident flight; note harness with rear d-ring at left (Eric Adams)

The aircraft lost power and went down minutes after takeoff. The pilot, Richard Vance, 33, later told investigators that he experienced engine trouble and decided to opt for a water landing instead of trying to crash land in Central Park.

A bystander captured footage of the landing, and it shows the helicopter striking the water and turning over. Flight instructor and helicopter pilot Cliff Browne reviewed the video for the New York Post, and he suggested that Vance performed the crash-landing perfectly. The aircraft's floatation bags appear to have deployed properly as well. However, the helicopter flipped over, with five passengers trapped inside.

Vance managed to escape the wreck and treaded water until a nearby tugboat, the Foxy 3, arrived and rescued him. The crew lashed the helicopter to their vessel in order to keep it afloat. Rescue divers arrived on scene shortly after, and in order to minimize risk, they had the tug cut its engines and drift with the East River's four-knot current while they worked. All five passengers were recovered from the helicopter; two were dead at the scene and three died later at a hospital. According to the New York Times, they were underwater long enough for the wreck to drift approximately two miles.

“It took awhile for the divers to get these people out. They worked very quickly, as fast as they could,” Fire Commissioner Daniel Nigro said. “One of the most difficult parts of the rescue were [sic] that five people were tightly harnessed . . . People had to be cut out.”

Eric Adams, an aviation journalist who was on another FlyNYON flight the same night, said that a carabiner on the back of each harness rig would have been attached to the aircraft with a tether. A knife was provided with each harness for emergencies, but Adams could not recall where it was located.

In a statement, FlyNYON extended its "deepest sympathies to the family members and loved ones of those involved in this tragic event." It said that it is fully cooperating with the authorities in their investigation, and it referred all press inquiries to the FAA and NTSB. The aircraft was operated by Liberty Helicopters.

The cause of the accident is still under investigation. In a debriefing, Vance told officials that he believes that a passenger's harness accidentally caught on an emergency fuel shutoff switch, cutting off the fuel supply to the engine.